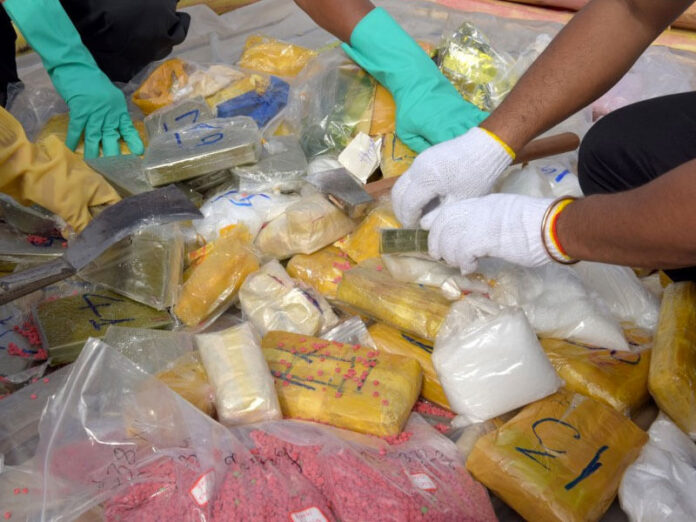 Drug trafficking has apparently grown to become  Nigeria’s most worrisome illicit venture. The  value of exchanges within the chain have grown to a disturbing height. Fight to clampdown on the menace has continuously been clouded with unending arrests and seizures, only for records to reflect nothing but an expanding network, rather than showing deterrence for a downward slope. Records have revealed no less than 17,647 drug offenders have been arrested by anti-narcotic enforcement agency in the Country since January 2021.

On Thursday, 04, August 2022, the National Drug Law Enforcement Agency (NDLEA) destroyed, by setting ablaze, over 560,068.31414 kilograms of assorted illicit drugs. The exercise formed a record of the largest to be destroyed in the 32-year history of the anti-narcotic agency. The Chairman/Chief Executive of the Agency, Brig. Gen. Mohamed Buba Marwa (Retd) who led top officials of the NDLEA, other security agencies and members of the public in burning the heaps of the illicit drugs in Lagos,  said the exercise was a strong message to drug barons and cartels that they will continue to lose their huge investments in the illegitimate venture if they fail to back out and opt for other legitimate businesses. A breakdown of the 560,068.31414 kilograms of the illicit substances burnt in Badagary area of Lagos include: 7,414.519kg cocaine; 161,206kg heroin; 1,144.8kg methamphetamine; 60, 144kg ephedrine; 311, 416.19162kg cannabis sativa; 10,091.83kg khat; 273. 223kg tramadol; 0.000170kg benylin with codeine and 8,207.7505kg of other psychotropic substances, which were seized by the Murtala Mohammed International Airport (MMIA) command; Lagos State Command; and the Seme Special Area command from persons convicted and sentenced by the Federal High Court as well as abandoned seizures. Following the destruction exercise, Gen. Marwa said, “It is gratifying to know that our drug law enforcement efforts are not in vain. Our efforts not only resulted in the seizure of the aforementioned drugs but also culminated in the arrest, prosecution and conviction of the offenders in court. Since January 2021, we have arrested over 17,647 drug offenders, of which 2,385 have been convicted in court. In the process, we have seized over 3.5 million kilos of assorted drugs. The business of today is yet another indication that officers and men of NDLEA are not relenting in the pursuit of the Agency’s mandate to make Nigeria safe from the drug scourge. I stand here today before you to give the assurance that NDLEA will continue to explore various ways, legal and within the ambit of orthodox drug law enforcement, to address the drug problem in the country. And there is no better time than now to adopt evidence-based programmes and policies to counter the destructive impact of the drug scourge, which has pervaded our society in the past few years.

“We are equally broadening our drug demand reduction efforts, and especially working hard on drug use prevention programmes. Among other measures, we are reaching out to young people through prevention messages on our social media platforms. We are not oblivious of the fact that some teenagers and young adults are being exposed to drugs at a very young age, particularly in deprived circumstances. The agency is working with other institutions to provide educational opportunities, vocational skills training and other socio-economic support for this vulnerable group. In everything we do, we strive to align our efforts with international best practices. Only a few weeks ago, NDLEA launched a 24/7 toll-free call Centre for people who are drug-dependent or suffering from drug use disorder, their families, employers of labour, and members of the public who need any form of help. The Centre which has a team of dedicated, well-trained professionals in the mental health practices including psychologists, psychotherapist, psychiatrist and counsellors, currently receives calls in English, Pidgin, Hausa, Yoruba, and Igbo languages.”

While the aforementioned measures are rational, more needs to be done in their scope, as well as exploring more organs of formidable strength to fortify the campaign against drug trafficking and abuse, and the associated strings. Leveraging more on partnership with local and international partners to broaden the scope of the measures of tackling the menace is pertinent. Since, the scope of the menace appears to have gone beyond what only the NDLEA can fight, it is rational that the fight must graduate to the height of an overarching campaign with full force, reflecting a fight the entire society has risen up to. Hence, the roles of key gate-keeping institutions of the Nigerian society have become essential.

More concertedly, fortifying the synergistic structures among security agencies to strengthen the structure of force to clampdown on the menace is pertinent. This is also important to develop intelligence system against the network of cartels and associated strings attached to the menace.

The need to identify newer approaches to expand the scope of the response against  the menace  is pertinent. Drug trafficking and its abuse have posed threats against the safety, health, economy, well-being and security of the Nigerian society. The impacts of its metabiotic effects have borne clusters of troubles which have inflicted their blows across virtually all facets of the society. Most troubling, the heightening scourge of insecurity and various crimes ravaging the Country have been linked with the proliferation of drug trafficking and its abuse in the Country recently. The scope of the menace has grown beyond what official authority alone can fight. It has now become a reality that it would only take a concerted fight of the entire working institutions – from social, cultural, religious, economic to political among other fabrics of the Nigerian society – to propel full-weight campaign to clam-down on the ugly phenomenon which has posed threats of debilitating impacts on the fabrics of the society.

The need to foritfy the measures towards building an overarching system of responses against the menace is pertinent. While the measures which the NDLEA have reeled out reflect their significance, they would however, not in their own limited reach fulfill the elaborate quest of exterminating the extended networks of the menace. The entire society must rise to the demands.

As disclosed by the NDLEA Boss, 17,647 drug offenders have been arrested since January 2021, of which 2,385 have been convicted in court. While the number of arrest is a positive development, the number of convicted offenders are still minute in comparison to the arrests made. Hence, the force which the strength of conviction would have borne for deterrence is not firm enough, with the low record, to deter the increasing expansion of the menace of the illegitimate network. Building on the system of prosecution of suspects becomes pertinent as a significant parameter in the structure of the fight for deterrence to deter enlarging resort to the chain of the menace.

Less than 4,500 megawatts capacity: Nigeria’s economy suffers power deficiencies that must be addressed