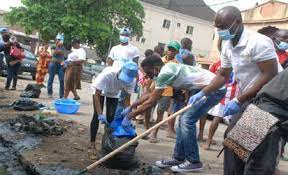 The Lagos State Government during the weekend joined the rest of the world to mark World Clean-Up Day by sensitising local communities on proper sanitation to improve good hygiene behaviours.

Speaking during the sensitisation campaign and clean-up exercise held at Alausa Village, Ikeja, the Permanent Secretary, Office of Environmental Services, Gaji Omobolaji said the exercise is about galvanising residents to clean up and sanitise their immediate environment.

The Permanent Secretary, who spoke through the Director of Environmental Education, Mrs. Monsurat Banire, said the exercise is a global social action programme that was first observed in Estonia, a European country in 2018 and aimed at combating the global solid waste problem including the problem of marine waste.

He added that the environment needs people just as people need the environment because there is a strong correlation between sanitation and health problems such as malaria, diarrhea, cholera, and death.

According to him, it behooves all to collectively contribute our quota in achieving and ensuring environmental sustainability.

Gaji, stated that the exercise this year focused on cleaning and sensitising the residents of Alausa, urging the participants to commence the exercise from the Ministry of the Environment premises and clean up trash as they walk along Governor’s Avenue through LASEPA through Kafi Street to Jogunosimi Makinde and Odewale communities where intensive cleaning exercise took place.

He explained that as a result of the large and increasing population in the state, waste generation is an unavoidable aspect of man’s activities and should be well managed.

He commended the Baale, lya Oloja, Volunteer Groups, NGOs, CDAs, Community members, Marketers, Artisans, and all other participants present for the success of the exercise, saying they are the vanguards of the environment.

He urged all residents to emulate the gesture to ensure adequate protection of the environment which will in turn result in the sustainable development of Lagos State.

In his welcome address, the Director of Sanitation Services, Dr. Hassan Sanuth appealed to residents to always take sanitation as a civic responsibility and ensure the regular clean-up of their immediate environment.

He said if the State is to become a healthy and productive society capable of contributing to the nation’s long-term development, then everyone must understand that environmental sanitation must not be taken for granted and appreciate why it is very important.

In his remarks, the Baale of Alausa Land, High Chief Toyin Badmus expressed appreciation to the government for the initiative and called on residents to support the government to sustain the culture of consistent clean-up of their environment as well as make it an everyday attitude.

He enjoined everyone to bear in mind that cleanliness is next to Godliness, adding that unhealthy practices in the environment could lead to contamination and diseases.