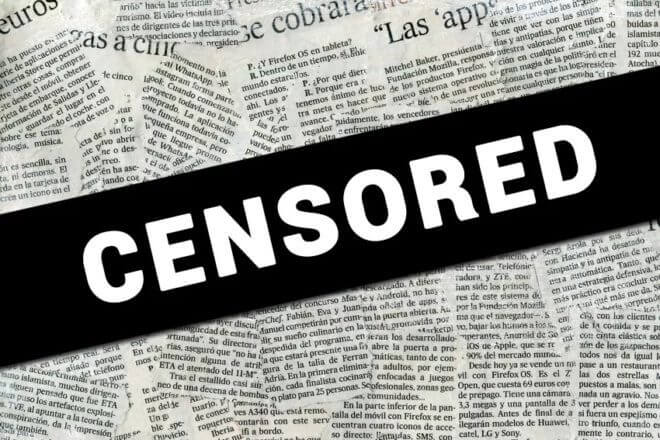 Attempt towards censoring the activities of the Press in Nigeria is driving to the height where resistance has begun vehemently to visit the moves. The argument has relied  strongly on the fact that the Government in its inability to contain the heightening ravages of disturbances in the Country, has only chosen to resort to gaggling the Press with mutations to keep the populace in the dark.  While the government has premised justification of its moves by defining it as regulatory measures to avoid sensational reports, concerned Nigerians have risen to contest what the definitions of ‘sensational’ really is, when those reports were actual reportage of realities of happenings taking place daily across the Country.

While the question of regulatory parameters cannot be overruled, it is antithetical to the rationality of modern democratic system, when the Government assumes overbearing seat to gaggle the Press. Attempt to censor the reportage of happenings in such subduing manner to mute the Press from making the reality known to the populace who under democracy are the  real source of State power, is inimical to political growth, and not in any way, reflecting light of possibilities to proferring solutions to the myriads of troubles ravaging the Country. Hence, leaving them (the populace) in the dark is tantamount to altering the orientation of a democratic government.

It is apparent that the overbearing attempts of the government most recently on the Press has portrayed calculated attempts to mute the media by limiting strokes, towards the end of making unknown to the populace, the depth of the failure in governance.  It would be recalled that the NBC had in a letter dated July 7, 2021 issued  a directive asking journalists, television and radio stations in Nigeria to stop “glamorising and giving too many details on the nefarious activities of terrorists and kidnappers” during their daily newspaper reviews. The NBC’s demand for ‘caution’ from broadcasters while reporting security challenges in the country was contained in a directive, titled: ‘Newspaper Reviews And Current Affairs Programmes: A Need For Caution,’ which was signed by the Director, Broadcast Monitoring, Francisca Aiyetan, on behalf of the new Director-General of the Commission, Balarabe Ilelah.

The directive had attracted reactions from various quarters, transcending just media stakeholders. Rights groups, activists, as well as Non Governmental Organisations have taken a whip against the Government over what is considered as antithetical to democratic climate.  The Socio-Economic Rights and Accountability Project (SERAP) had in reaction, asked President Muhammadu Buhari to urgently instruct Minister of Information and Culture, Mr Lai Mohammed and the National Broadcasting Commission (NBC) to withdraw within 24 hours the directive containing the gag order banning journalists and broadcast stations from reporting details of terrorist attacks and victims across the country. SERAP  had averred with “grave concern that the contents of the NBC directive would impermissibly restrict the rights to freedom of expression, information, and victims’ right to justice and effective remedies that are central to public debate and accountability in a democratic society. Reporting on the growing violence and killings in many parts of the country is a matter of public interest.”

In a letter dated July 17, 2021, signed by its deputy director, Kolawole Oluwadare, the Right group had argued that: “The contents of the directive by the NBC to journalists and broadcast stations are entirely inconsistent and incompatible with Nigeria’s obligations under article 9 of the African Charter on Human and Peoples’ Rights and article 19 of the International Covenant on Civil and Political Rights. We would be grateful if the repressive directive is withdrawn within 24 hours of the receipt and/or publication of this letter. If we have not heard from you by then, the SERAP shall take all appropriate legal actions in the public interest.

“The NBC directive to journalists and broadcast stations to stop reporting these cases, coupled with the possibility of fines and other punishment, would have a disproportionate chilling effect on the work of those seeking to hold the government accountable to the public.

“The broad definitions of what may constitute ‘too many details,’ ‘glamorising, ‘divisive rhetoric,’ and ‘security issues’ heighten concerns of overreach, confer far-reaching discretion on the government, and suggest that the NBC directive is more intrusive than necessary. These words and phrases do not indicate precisely what kind of individual conduct would fall within their ambit. The vague and overbroad definitions of ‘too many details,’ ‘glamorising, ‘divisive rhetoric,’ and ‘security issues’ also raise concern that the NBC directive unduly interferes with the rights to freedom of expression and information, and is disproportionate to any purported legitimate governmental aim. Ill-defined and/or overly broad directives are open to arbitrary application and abuse.

“The use of these words and phrases by the NBC, given their opaque and ambiguous meaning, leaves open the possibility for application beyond unequivocal incitement to hatred, hostility or violence. Such words and phrases may function to interpret legitimate reporting by broadcast stations, journalists, and other Nigerians as unlawful. Exacerbating these concerns are growing restriction of civic space, the suspension of Twitter in Nigeria, and the attempts by your government to push for the amendment of the Nigeria Press Council Act and the National Broadcasting Commission Act, to further suppress media freedom, freedom of expression and access to information.

“Allowing the media to freely carry out their duties is essential to building a secure society and leaving no one behind. Conversely, imposing impermissible restrictions on broadcast stations, journalists and other Nigerians undermine the security that builds a healthy and vibrant society. Article 19(1) of the International Covenant on Civil and Political Rights establishes the right to freedom of opinion without interference. Article 19(2) establishes Nigeria’s obligations to respect and ensure this right, which includes the freedom to seek, receive and impart information and ideas of all kinds, regardless of frontiers, and through any media of one’s choice.

“Under article 19(3), restrictions on the right to freedom of expression must be ‘provided by law,’ and necessary ‘for respect of the rights or reputations of others or ‘for the protection of national security or of public order, or of public health and morals.’ Although article 19(3) recognizes ‘national security as a legitimate aim, the Human Rights Council, the body charged with monitoring implementation of the Covenant, has stressed ‘the need to ensure that invocation of national security is not used unjustifiably or arbitrarily to restrict the right to freedom of opinion and expression.’

“Since article 19(2) promotes so clearly a right to information of all kinds, this indicates that your government bears the burden of justifying any restriction on reporting of cases of violence and killings, and withholding of such information as an exception to that right. Any restrictions should be applied strictly so that they do not put in jeopardy the right itself. The NBC directive to broadcast stations fails to meet the requirements of legality, necessity and proportionality.

“The requirement of necessity also implies an assessment of the proportionality of restrictions such as those being imposed by the NBC, with the aim of ensuring that restrictions target a specific objective and do not unduly intrude upon the rights of targeted persons. The interference with the constitutional and legal duties of journalists and broadcast stations cannot be justified in the context of the right to information, as the NBC directive has not shown that their reporting would impose a specific risk of harm to a legitimate State interest that outweighs the public’s interest in such information.

“The NBC directive may also create an environment that unduly deters and penalizes broadcast stations and journalists, and the reporting of government wrongdoing more generally. The Special Rapporteur on the right to freedom expression has concluded that national security considerations should be ‘limited in application to situations in which the interest of the whole nation is at stake, which would thereby exclude restrictions in the sole interest of a government, regime, or power group. SERAP notes the collective interdependency of the compendium of constitutional and international human rights, which function to collectively complement and enhance the advancement of the security and rights of each individual in society.”

It would be recalled that a controversial bill titled:  An Act to amend the Nigerian Press Council Act. Cap. N128, Laws of the Federation of Nigeria 1992 “to remove bottlenecks affecting its performance and make it in tune with the current realities in regulating Press and for related matters,”  had been a source of contention which generated wild reactions from media and non media stakeholders. The provisions of the amendment bill seeks  “to regulate the print media via a press code and standards, grant or revoke publishing licenses, register or delist journalists as well as ensure truthful, genuine and quality services and media practitioners. It confers on the Press Council the power to determine ethics and fake news, investigate infractions and impose fines on journalists, publishers and distributors. It proposes fines of up to N.25m on the journalist, and N5million on a corporate body. It specifies jail terms of one to three years and fines ranging from N.25m to N5m on journalists, news agents and media outlets. It proposes a fine of between N2m to N5m to erring purveyors, two years in jail and compensation for fake news while the medium of publication is liable to N10m fine or closure for one year in addition to payment of N20m as compensation to the aggrieved party.”

Inference drawable from the spate of attempts by the Nigerian Government to restrict the freedom of media appears to be giving no less reflections than calculated attempts to subdue the latter by clauses which are unethical to the practice of democracy, where the media is given the pride of place as an independent institution defined with the prestigious nomenclature as ‘the fourth estate of the realm.’

The Government should rather than resorting to muting the Press from reporting the ravages of prevailing circumstances in the Country, put more effort to seeing to how to address the myriad of troubles vitiating the Country. Civilised democratic government of the 21st Century, rather than developing resistance to criticism, considers and embraces same with constructive perception as tools to put it on lively toes to address shortcomings and deficiencies in governance. The orientation of the Nigerian Government should no less be constructed along such perception as a government subscribing to democracy.

It remains important to have institutions serving as mechanisms of accountability, readily in place, to challenge the Government and keep it awake to responsibility and responsiveness. The media in Nigeria has been playing this role over time. Gagging the Press from this responsibility portends catastrophic tendencies to leave behind a systemic rot in a climate where impudence, impunity and gross irresponsiveness are given ample chance to thrive. This will be detrimental by all means to Nigerians who deserve the right to enjoy the best results of good governance.

Nigeria at 61: Access Bank to reward 14 customers with N1m each