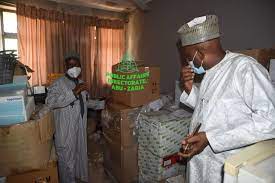 This is to strengthen research and digital educational infrastructure of the university, it said.

A statement issued by Malam Auwalu Umar, the Director, Public Affairs Directorate of ABU on Friday in Zaria, said the donation was under the framework of UNESCO – ICHEI academic partnership.

“Since the start of the partnership in 2019, according to Ming, ABU and UNESCO – ICHEI had fruitful collaborations in the areas of teacher-ICT capacity building, digital educational infrastructure and academic exchanges,’’ he said.

The Vice-Chancellor, Prof. Kabiru Bala, who received the devices from Prof. Mohammed Mu’azu of Department of Computer Engineering, expressed the institution’s profound gratitude and appreciation to the centre for the “generous donation”.

The vice-chancellor explained that the devices came at a right time and that they would “indeed make a huge difference in the advancement of teaching and learning” in ABU.

In a related development, the International Atomic Energy Agency (IAEA) has donated 40 assorted laboratory equipment and other consumables worth 73,148 Euros to the university.

According to Umar, the donated laboratory equipment and the consumables are to be used at IAEA’s Africa Centre of Excellence for Neglected Tropical Diseases and Forensic Biotechnology (ACENTDFB).

He added that the equipment and other consumables, which were delivered to the university through the Nigeria Atomic Energy Commission (NAEC), were mainly for COVID-19 analysis.

The vice-chancellor expressed immense gratitude to the IAEA for the “wonderful” donation and Nigeria Atomic Energy Commission (NAEC) for facilitating the gesture.