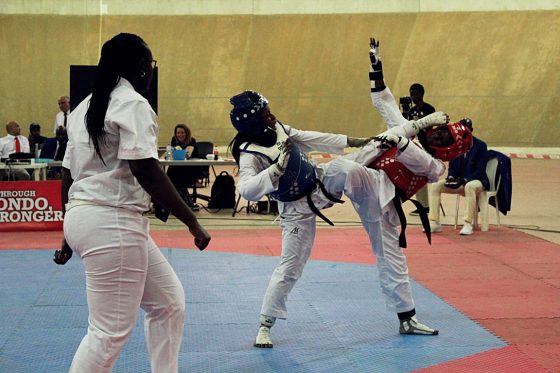 Osun State Taekwandoist, Fatimah Aderibigbe has won the first medal for the state in the female heavyweight category.

She won the medal after defeating her counterpart from Oyo state in three straight sets registered to Osun state name on the medal table.

The games took place at the indoor sports hall of the University of Benin, venue of taekwondo, wrestling, handball and football competitions.

Fatimah expressed her gratitude to the State Government for the support given in achieving the feat.

Meanwhile, Commissioner for Youth and Sports Development, Yemi Lawal has been moving round venue of the sporting centres to cheer Osun athletes participating in various events.

Among venues visited by the Commissioner, was the tennis court of the Samuel Ogbemudia stadium, where he supported one of the athletes with a brand new racket worth N65,000 and financial assistance to aid him to victory.

He later moved to the indoor sports hall of the university where Osun taekwondoists are also taking part in various elimination category.

He was joined by the Director Of Sports in the Ministry of Sports, Mr. Layi Adesiyan, General Manager, Osun State Sports Council, Mr. Rotimi Dunmoye and other members of the entourage to give psychological boost to the athletes.