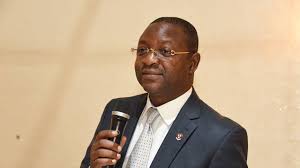 Minister of Youths and Sports Development Sunday Dare has expressed satisfaction with the level of compliance with COVID-19 protocols by athletes and officials participating in the 20th National Sports Festival (NSF) in Benin.

Dare said this on Tuesday in Benin shortly after he was conducted round the games village by University of Benin (UNIBEN) Vice Chancellor, Prof. Lilian Salami, in company of Gov. Godwin Obaseki of Edo.

Our Correspondent reports that UNIBEN is the official camp for athletes and officials for the festival.

“We are satisfied with the compliance with all COVID-19 protocols; we had a brief from the state COVID-19 Incident Manager, Dr Andrew Obi, who told us that about 6, 500 athletes are around for the games.

“COVID-19 test conducted shows about five persons confirmed for virus and they have been isolated and receiving treatment. This shows about 95 per cent success rate.

“We are satisfied, we got a lot of support from Presidential Task Force and Nigeria Center for Disease Control, we are satisfied and don’t expect anything less.

“As far as COVID-19 protocol is concerned the rules are set and we will not bend it for any state. All states must go through the established rules,” Dare said.

On his part, Gov. Godwin Obaseki, said that the athletes seemed to have settled in.

“You can see them having their launch, they are comfortable and the camp is busy with a lot of activities and this is how a games village should be.

“It’s rainy season, mosquito are still around and we will continue to take care of it. For electricity, we are on top of it and so far so good we are on course,” he said.

Earlier, UNIBEN vice chancellor said that Edo government had assisted in the fumigation of the area and had helped reduced mosquito in the hostel at the games village.

“We have had 24/7 electricity but due to the rain which resulted into technical problem, Benin Electricity Distribution Company had issues but was restored in less than three hours,” she said.