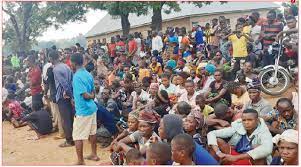 The Chairman, Governing Board, North East Development Commission (NEDC), retired Maj.-Gen. Paul Tarfa said that the Commission has accelerated resettlement of persons displaced by the Boko Haram insurgency in the region.

Tarfa said this on Tuesday in Maiduguri at a three-day capacity building workshop on conflict sensitive reporting, organised by the Commission for journalists.

He lauded President Muhammadu Buhari for the feat, adding that the establishment of the Commission fast track speedy return of peace to the troubled region.

“The activities of the NEDC fast track the return of relative peace to the troubled areas as victims of insurgency were being resettled and getting back their normal routine life,” he said.

He also commended journalists for publicising its activities, adding that this had made the public to be more aware of the existence and objectives of the Commission.

Also, NEDC’s Managing Director, Mr Mohammed Alkali said the training was designed to expise the participants to the necessary skills required in reporting conflict in a sensitive environment like the North-East.

He noted that the journalists based in the North-East region had done well in reporting the activities of NEDC since inception.

Alkali urged the participants to reflect in their reports the true situation of things in the region, stressing that, “what people outside the zone often hear was far from the reality on the ground”.

“Peace has been restored in the zone, and people are going back to their normal day business activities.

“In Maiduguri; now you can walk freely, go anywhere and do whatever legitimate business you wish to do. Unlike five or 10 years ago, I don’t think I’ll even want all of you to come here,” he said.

The Managing Director appreciated the Federal Government for its resolve towards tackling insecurity across the country through various channels, including NEDC.