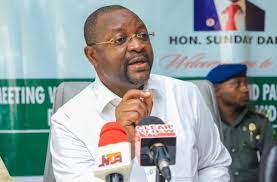 The Minister of Youth and Sports Development, Sunday Dare, on Friday in Abuja said he has dissolved the boards of 31 national sports federations in the country.

The minister, represented by Simon Ebhojaiye, the Director of Federations, Elite Athletes and Development (FEAD) in the Federal Ministry of Youth and Sports Development, announced this to newsmen.

He said the dissolution was in keeping with the Olympic charter which stipulates four-year tenure for all sports federation boards.

“Having run a full Olympic cycle, the Boards of the NSFs inaugurated on June 21, 2017 are hereby dissolved to pave way for fresh elections,” Dare said.

The minister consequently set up caretaker committees for the 31 federations until elections were conducted and new boards inaugurated.

Reports state that the committees are now saddled with the responsibility of ensuring a good outing for Team Nigeria at the Tokyo Olympic Games slated for July.

Others are those of Hockey, Judo, Karate, Kickboxing, Wushu Kungfu, Rowing, Canoeing and Yatching, Rugby and Scrabble.

Reports state that most of the federation Presidents was however returned as committee chairmen.

The three-member committees were made up of Chairman, Secretary and a member for each federation.

For example, the Athletics committee has Olamide George as Chairman, Adisa Beyioku as Secretary-General and Maria Wophill as member.

Basketball also has Musa Kida as Chairman, Afolabi Omobola as Secretary-General and Florence Adeyanju as member.

The minister also said, having consulted with the Nigeria Olympic Committee (NOC), the ministry has concluded to organise elections into the federations using the Code of Governance.

The code is the administrative machinery that regulates the governance of sports federations in Nigeria.