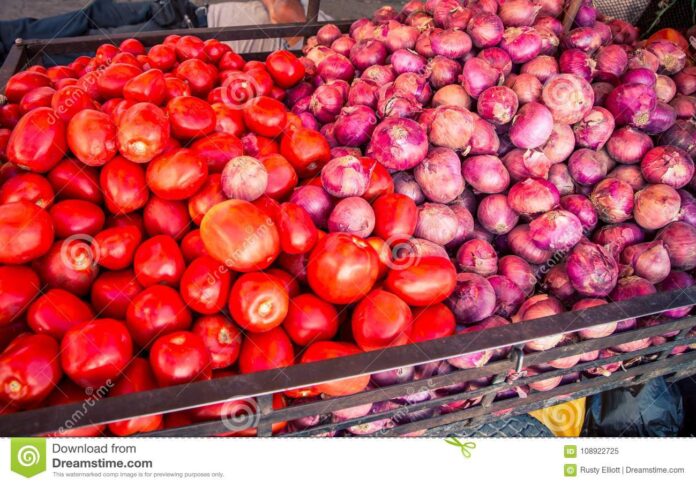 A survey of several markets within FCT revealed that  the price of the product had increased by nearly 50 per cent in the last two weeks.

The traders blamed the increase in price on the commencement of the rain.

A trader at Abattoir Market in Karu, Mr Abdullahi Mustapha, said that the prices of pepper and ‘shombo,’ and other soup condiments; had also gone up during the period.

According to him, a dustbin basket of broken tomatoes or “baje’’ is now N1,500 saying this used to be the price of normal tomatoes.

Mustapha said price of big bag of pepper is now N20,000 from N16,000, adding that items that had to do with tomatoes, pepper, shombo or ‘tatashe’ condiment were now expensive.

“We all know the importance of rainfall in farming but just like the way it has advantage, there is also disadvantage.

“In the case of tomatoes, the disadvantage is that it makes this product fall off before they are ripe.

“Tomatoes are not planted in a garden but in an open field and the rainfall affects their growth,” he said.

A buyer Ms Glory Philip observed that with the increase in the prices of the condiments “it seems like we are going back to the days of cooking stew without seed tomatoes.”

“Tomatoes are now so expensive. In the market, you can hardly get tomatoes of N200.

“One should be grateful to any trader who sells at that amount,’’ Phillip said.

“The tomatoes we have now are not big. They are small like cherry.

“I bought tomatoes from a roadside trader and he gave me six small pieces for N100. I told him to add N50 tomato quantity to make it N150 and he just added two big pieces,’’ Okon said.

Suleiman Issa, a roadside trader, said that tomatoes were so expensive now that traders were not making profit.

Issa said that the price would continue to go up as the rainfall became greater.

“This rainy season makes tomatoes expensive because they fall off before they are harvested.

“Some traders don’t even sell tomatoes this rainy season. Imagine buying the medium dustbin basket for N12,000 which normally is not supposed to be.

“How much do you sell it to buyers because they will complain,’’ he said.

“Some customers don’t know that it’s not our fault. The price has gone up; we also buy from other traders.

“As a housewife, I use the tomato paste and onion to support the cooking and since the price of onion has come down, it helps a lot,” Obi said.