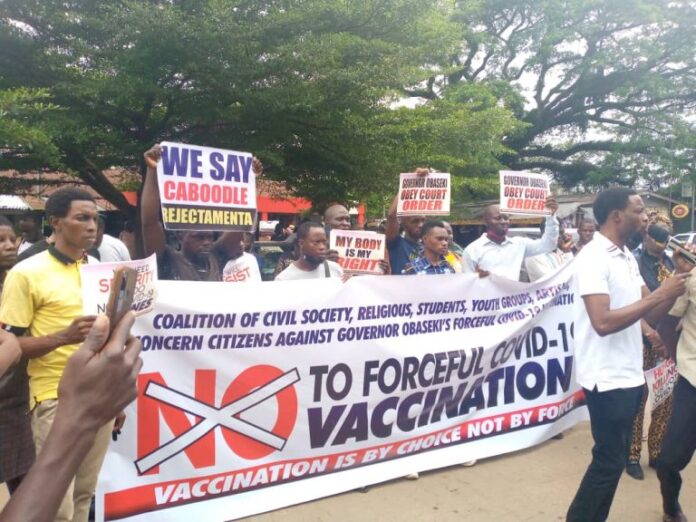 Coalition of civil society organisations, religious bodies, students etc have warned the governor of Edo State, Godwin Obaseki, to desist from his pronouncement of enforcement of forced vaccination or else he faces stiff civil disobedience with a caveat that if he does not renounce the pronouncement within 48 hours he will face a protest march all over the state.

Addressing the media while on a protest to the secretariat of the Nigeria Union of Journalists (NUJ) in Benin City, the protesters warned the governor to change his course and embrace issues that are of interest to the generality of the people of the state.

“What’s Governor Godwin Obaseki’s special interest in COVID-19 vaccination. There are many issues confronting the people which the governor is not addressing. Such issues include insecurity, lack of infrastructure, poverty etc. Yet Governor Obaseki’s attention is solely on forcing the people to be vaccinated.

“He is not interested in the welfare of the people. One should have thought his focus would be on the promulgation of anti-grazing law as herdsmen continue to be security risk to our people who they kill indiscriminately.

“Our roads are not motorable. There is insecurity in the state. There are so many other issues worthy of government attention which the Godwin Obaseki-led government is not showing interest in.

“What makes it terrible is that there is a court ruling stopping the governor from the enforcement of COVID-19 vaccination which he has refused to obey. Being a product of court ruling it is absurd that he is not obeying a court ruling.

“If he does not rescind his pronouncement and obey the court ruling we assure him that he will face stiff resistance from us. The civil disobedience will so massive beyond what he may be expecting,” the protesters echoed.

The protesters went round some banks, financial institutions and the likes within the city centre  in the course of their action.