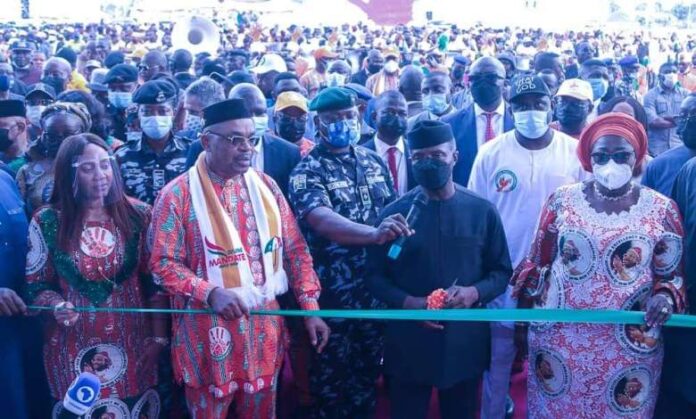 Prof Osinbajo while speaking at the Dakkada Luxury Estate along the Airport Road, Uyo where he performed the official flag-off of the proposed low income housing project thanked Governor Udom Emmanuel for a warm reception accorded to him and conveyed message of felicitations from the President Muhammadu Buhari to Akwa Ibom State at 34.

He added that it has always been a pleasure to be in Akwa Ibom.

Recalling his former visit to the state where he inaugurated, among others, the flour mill, syringe factory, metering factory, the Vice President expressed delight with the satisfaction of value of projects undertaken by Governor Emmanuel’s administration.

He described the Dakkada Towers and the Luxury Estate as milestones, the Vice President said he was proud of the achievements of Governor Emmanuel in the last six years of his stewardship.

He noted that his infrastructure drive was in sync with that of the Federal Government.

The Vice President noted that the Federal Government, through its Economic Sustainability Plan, has already initiated a mass social Housing programme to build 300 housing units across the country, and 24 states, including Akwa Ibom, have keyed into it by allocating land for the housing units.

He said that the Federal Executive Council last month approved the Lagos-Calabar Rail project which will pass through Uyo, and also FEC last year approved a full business case for Ibom Deep Seaport.

In his words, “Your focus on infrastructural development is significantly in sync with what the Federal Government plan to achieve and what it has been doing, as you are aware the President has prioritized the development of infrastructure, roads, rail, power and broadband connectivity.

“Despite the severe economic headwinds that we have experienced in the past 6 years, we have invested more than any other federal administration in infrastructure. As at last year, we had expended over 8.9 trillion on capital, just last month the Federal Executive Council approved the Lagos-Calabar Rail project.”

He urged oil and gas industries operating within the state to relocate their corporate headquarters to Akwa Ibom State, having completed one of the smartest Intelligence buildings in the state complete with architectural beauty with the latest technology developed for smart efficiency.

Speaking earlier, Governor Emmanuel while addressing the Akwa Ibom people during the flag-off ceremony of the estate said the idea of the Dakkada Luxury Estate, became necessary to address the high demand of foreign investors into the state.

The governor noted that the luxury estate is designed with standard convenience of provision of water, constant electricity supply with a backup turbine to generate 15mega watts of gas turbine which will restore electricity once there is an interruption.

Also, the Governor during the inauguration of the 21 storeys Dakkada Towers, expressed appreciation to God for the successful completion of the project and thanked the Vice President, Prof. Yemi Osinbajo for accepting to inaugurate the smart building.

He appealed to the federal government through the vice president to make a pronouncement that will see to the relocation of the oil multinational companies’ corporate headquarters to Akwa Ibom State, stating that his administration is poised to spearhead innovations that will reposition the state among the comity of nations in the world.

Governor Emmanuel further maintained that before the expiration of his administration, the state will experience robust economic projects completed across the state, and thanked Akwa Ibom people for believing in him, assuring that he will not let the people down.