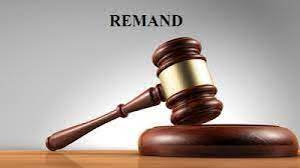 A Kaduna Magistrates’ Court on Thursday ordered that a 28-year-old man, Abdalah Sanusi, be remanded in a Correctional Centre for allegedly raping a 14-year-old girl.
The police charged Sanusi, who lives in Degel Road, Ungwan Rimi, Kaduna, with rape.
Magistrate Ibrahim Emmanuel, gave the order following a motion by the Prosecution Counsel, Insp Chidi Leo, that the matter be referred to the Director of the Public Ministry, DPP for legal advice.
Emmanuel, who did not take the plea of Sanusi, also ordered the prosecutor to send the case file to the DPP for advice.
The magistrate adjourned the case until Jan. 20 for further mention.
Earlier, Leo said Sanusi committed the crime on Nov. 30 at his residence.
Leo said that the defendant who is the victim’s neighbour went the victim’s mother’s shop and bought some provisions without paying.
He said Sanusi told teenager to go with him to his house to collect the money.
”On getting there, he bolted his room door and raped her,” he said.
The prosecutor further said Sanusi brought out a knife and threatened to stab her if she shouts for help.
The offence, he said, contravenes the provisions of Section 266 of the Penal Code of Kaduna State, 2020(as amended).
The newsmen reports that the section prescribes life in prison for rape.