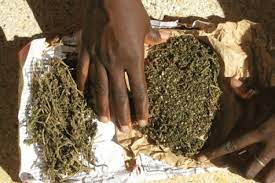 A Federal High Court in Ibadan on Wednesday sentenced a 29-year-old woman, Shukurat Ademola, to 10 months in prison for dealing in 500 gm of Cannabis Sativa.

Delivering judgment, Justice Uche Agomoh held that she convicted and sentenced Ademola based on the evidence tendered against her by the National Drug Law Enforcement Agency.

Agomoh noted in her judgment that she took cognizance of the fact that the convict did not waste the time and resources of the court before pleading guilty as well as being a first time offender.

She also said that Ademola was remorseful of her action and willing to contribute positively to the society.

The judge therefore, sentenced Ademola to 10 months in the correctional Centre, effective from the date she was first arrested.

The NDLEA counsel in Oyo State, Mr D. O. Otunla, had informed the court that the convict was arraigned on a-count charge bordering on unlawful possession of Cannabis.

Otunla further said that the agency’s operatives arrested Ademola on July 13 at  the School for the Handicapped, Ijokodo, area of Ibadan, Oyo State.

According to the prosecutor, the NDLEA operatives received intelligence reports that Ademola was in possession of the illicit drug which weighed 500gm concealed in a sack.

He stated that the offence contravened Section 11 (C ) of the NDLEA Act Cap. No.30 Law of the Federation 2004.