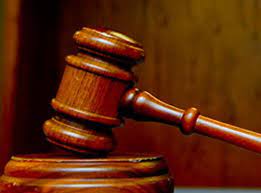 An Iyaganku Chief Magistrates’ Court, Ibadan, on Tuesday, ordered the remand of a 33-year-old man, Ajani Jamiu, at Agodi Correctional facility, for alleged unlawful possession of a firearm and armed robbery.

The police arraigned Ajani on a two-count charge of armed robbery and unlawful possession of a firearm.

The Chief Magistrate, Mr Emmanuel Idowu, who did not take the defendant’s plea for want of jurisdiction, ordered his remand at Agodi correctional facility, Ibadan.

Idowu, who ruled that the defendant would remain in custody to await the receipt of legal advice from the Directorate of Public Prosecutions (DPP), adjourned the matter until March 16 for mention.

Earlier, the Prosecution Counsel, Insp. Femi Oluwadare, told the court that the accused, on November 28, 2022, at about 7.30 pm in the Moniya area, Ibadan, allegedly attacked his victim, one Samuel Ojelade, while armed with Para English Pistol.

He told the court that the accused allegedly had in his possession a prohibited Para English Pistol, which he could not give a satisfactory account of how he came about it.

Oluwadare alleged that the accused, armed with the firearm, dispossessed Ojelade of his Tecno cellphone, valued at N85,000 and N7,500 cash.

The prosecution told the court that the offence contravened Sections 1(2) and 3 of the Robbery and Firearms (Special Provisions) Act Cap, RII, Vol. 14, Laws of the Federal Republic of Nigeria 2004.