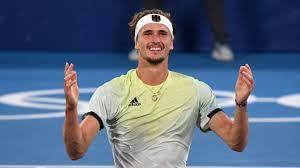 Olympic champion Alexander Zverev rates Europe as being the favourite against Team World at this weekend’s Laver Cup in Boston.

The German insisted his team Europe were better in spite of the absence of the big three —- Novak Djokovic, Rafael Nadal and Roger Federer.

“We won the last ties. So, we know how to do it. And we have the winners of the last three tournaments in our team,” Zverev said.

The German was referring to his Olympic gold and Cincinnati Masters trophies and the US Open title of Russia’s Daniil Medvedev.

Federer and Nadal are recovering from operations while Djokovic is exhausted after a long year.

It was a year in which the Serb narrowly missed a calendar year grand slam by losing the US Open final to Medvedev.

The three-day Laver Cup is no official tournament with ranking points, but Zverev said it was still “a huge event which all players like to play and always want to win.

“The tie Europe against the rest of the world always makes it interesting and exciting.”

Europe have won the first three editions of the tournament created with the help of Federer’s agency TEAM8.

The 2020 edition fell victim to the coronavirus pandemic.

Led by number two Medvedev, all six European players are in the top 10 of the rankings.

Bjoern Borg is European captain while the world team is captained by John McEnroe.

Three singles rubbers and a doubles rubber are played each day, with a victory worth one point on Friday, two on Saturday and three on Sunday.

The team to first reach 13 points wins the tournament.