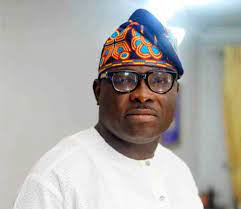 The House of Reps Member representing Somolu Federal Constituency, Hon. Ademorin Kuye, has revealed that the Former Governor of Lagos State, Ahmed Bola Tinubu deserves the presidential slot in the 2023 General election because he has shown dedication, commitment and meritorious leadership and believe in the unity of the country.

The lawmaker made the disclosure during an interview with Nigerian NewsDirect at the inauguration of the states steering committee for Asiwaju Bola Tinubu in Abuja recently.

He said, “Today represents a milestone in the political history of our dear country. We’ve searched wide and near, we’ve searched North, South, East and West and we’ve found worthy the person of Tinubu, a leader that can at a time like this take the baton at the end of the success tenure of our dear President Buhari.

“We’re using this platform to passionately appeal to Tinubu to contest on the platform of our great party All Progressive Congress (APC). This is the man that has shown consistency, he has shown his commitment to constitutional democracy even at a very smaller pace for being a Governor of Lagos State, he has shown economic dexterity, and turning around the economic backwardness of Lagos State to become one of the biggest economy in Africa today.”

Hon. Ademorin said, “Show me how many leaders of other tribes who has the kind of leverage we have in Lagos State or a leader that has mixture of races without lookin at people base on their religion. We have seen a leader who is able to discover talent and to put them in the right place and on the right platform to excel and that is why we are using this occasion to call on him to lead this country.”

On consensus, Kuye explained that the party constitution is very clear as it allows for consensus candidature.

According to him, the Constitution of Nigeria also encourages zoning and rotation of power so that there’s balance in the leadership structure of the country.

“We believe that Tinubu has done much for almost everbody in this party today from the time of formation till now, for all the sacrifices he has made, for the love that he has shown, for all the commitment he has shown Campaigning in all the states of the country,he deserves to be a consensus candidate.

While assessing President Buhari’s administration, he stressed that it was unfortunate the president came in at a time that the country is facing so many challenges.

He said, “There’s a global threat from terrorists. We came in at a time this threat is so apparent that they need all hands on deck. Unfortunately, the opposition party that are supposed to join force with the government in ensuring to bring total peace, harmony and love to the people of Nigeria have been ensnared, and their hatred for the government has a result of the defeat they suffered in the last two elections. We now see people sympathizing with terrorists, kidnappers which is very unfortunate.”

The lawmaker noted that President Buhari has done tremendously well in terms of infrastructure position, renewal of decayed infrastructure and commendable leadership.

On some of the achievements in his constituency, Ademorin stated that they  are registering over 200 indigent students from our for for NECO Examination for free.

He said, “Next week we will be carrying out lots of empowerment programs, which is distribution of working tools particularly for artisans, and we’re equally distributing funds to traders in the constituency.

“We are not stopping at that, we are building and we are completing by the end of this month a sickbay for our primary schools, and we are finishing it with the distribution Ambulance to our schools.”

Also speaking, the Lawmaker representing Ningi/Warji Federal Constituency, Hon. Abdullahi Abdulkadir said,  “They are happy to be part of this historic occasion and believe in Tinubu’s idea and  personality who has proven himself beyond any doubt that he’s a man of so many credentials, a man that is eminently competent and capable of leading this country to greater heights and as well taking us to a promise land come next general election.”