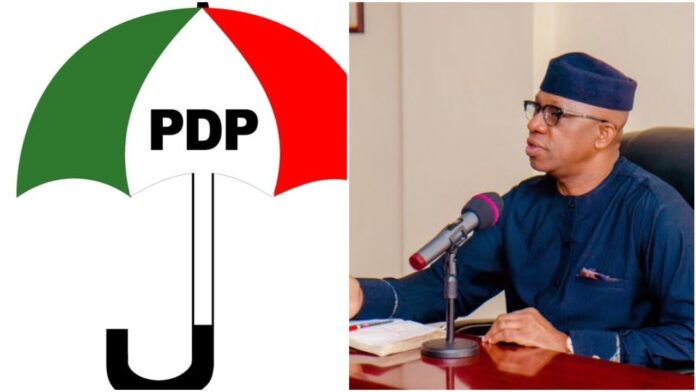 The Ogun State chapter of the Peoples Democratic Party (PDP) has reacted to yesterday’s tanker explosion that killed a woman and her grandchild in Lafenwa area of Abeokuta, the state capital.

The party said the Governor Dapo Abiodun government did not need its advice to fix the road.

Newsmen recalls that the Lafenwa explosion was the third in recent times across Ogun State, claiming many lives in similar incidents within the month of November.

While commiserating with the people of Ogun and families of the victims of the Lafenwa Market inferno, the PDP reminded the public of its “sustained advocacy and patriotic calls to the fumbling APC government under Prince Dapo Abiodun to earnestly rehabilitate the terribly impassable Lafenwa/ Ayetoro road.”

The opposition party expressed sadness that “this inhumane government chose to play deaf and dumb to the plight of the people whose means of legitimate livelihood depends largely on that road.”

In a statement made available to Newsmen by its Publicity Secretary, Akinloye Bankole, the PDP in Ogun State said the Abiodun government has “intentionally weaponised dilapidated roads against the very people it swore to protect. There is no gainsaying that the incident in which a truck loaded with PMS overturned could have possibly been avoided if the Dapo Abiodun government had heeded our party’s several calls on the need to make the Lafenwa-Ayetoro road passable before now.”

According to Bankole, the party urged the “road show erroneous government”, led by Abiodun to imbibe high sense of patriotic zeal and be more proactive to the genuine concerns of Ogun people.

The spokesperson was concerned that a responsible and responsive people friendly government would certainly not wait till a disaster such as inferno occurs in an economically viable area like Lafenwa market before showing responsibility.

“It is indeed worrisome to note that as the state still griefs in the face of widespread activities of members of secret cults across the state, we have a case of large scale inferno presently, struggling for wicked attention.

“Therefore, with all sense of compassion, we urge the good people of Ogun state to take solace in the fact that this era of deliberate insensitivity manifestly demonstrated by the sinking APC government would not last. It can not guarantee safety of lives and property.

“We hereby call on the people to continue to organize their energy while they remain calm and law abiding. Every shade of agony which the ruling APC government represents will soon be over,” the PDP submitted.

Meanwhile, Governor Abiodun, in his condolence message to victims of the fire incident, lamented the incessant tanker explosions in the State.

The Governor revealed that the Lanfenwa-Ayetoro road was “redesigned and being rebuilt to avoid such sad occurrences,” saying efforts will be put in place to ensure that fuel-laden tankers have no hindrance in navigating the rail line axis of Lafenwa.