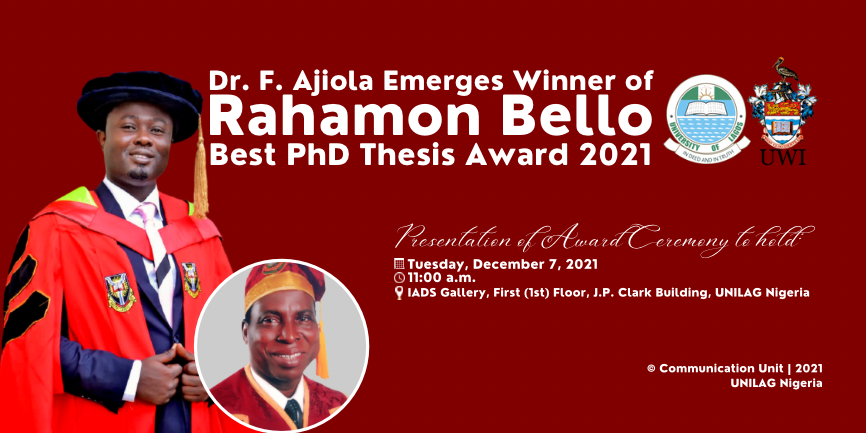 Dr Felix Ajiola of the University of Lagos has emerged the winner of the Rahamon Bello Best Thesis Award for 2021.

The award was put together by the Institute of African and Diaspora Studies, University of Lagos.

Dr Feyi Ademola-Adeoye, Deputy Director, Institute of African and Diaspora Studies, University of Lagos, disclosed this in an interview with the Newsmen on Wednesday in Lagos.

According to her, Ajiola, currently teaching History at the University of Lagos, beat 23 others from universities in Nigeria and other African countries to win the prize.

“We have just announced the winner of this year’s award, and on Dec. 7, we shall be doing the presentation ceremony to the winner.

“A couple of months ago, a call went out for people who finished their PhD in the last two years, to apply for a competition  that was being organised in honour of the 11th Vice Chancellor of the University of Lagos, Prof. Rahamon Bello.

“We received a total of 24 entries, that is PhD thesis for this year, and it was limited to fresh holders who must have obtained the degree in the last two years.

“We had people who submitted their thesis from various universities across the country, such as UNILAG, University of Ibadan, Covenant, Babcock, Imo State University, among many others, as well as those from other parts of the continent,” she said.

She said that the assessors were drawn from Kenya, Nigeria and United Kingdom.

According to the deputy director, the assessors were all independent, and in choosing the best three, they all came together via zoom to harmonise their choices.

” I must tell you that they were unanimous in their choice of the first, second and even the 3rd place winners.

“Even though they worked independently, they all did their ranking, and in doing this, they discovered that their choices were the same,” she told Newsmen.

According to her, the third position went to Dr Louis Kusi Frimpong with thesis: Fear of Crime in the Sekondi-Takoradi Metropolis: Exploring the Role of the Built Environment and Community Social Organisation, PhD (2019) Geography and Resource Development, University of Ghana, Legon.

She said that the first and second runners up would be presented with certificates and plaques.

She added that it was to promote multi-disciplinary research in African studies.

The deputy director noted that Dr Adebayo Kudus Oluwatoyin, a sociologist and Research Fellow at the Institute of African Studies, also of the University of Ibadan, emerged the winner of the first edition of the award in 2020.

According to the official, Bello is the sole sponsor of the award.

Bayelsa set to review its Education Policy for next 15 years