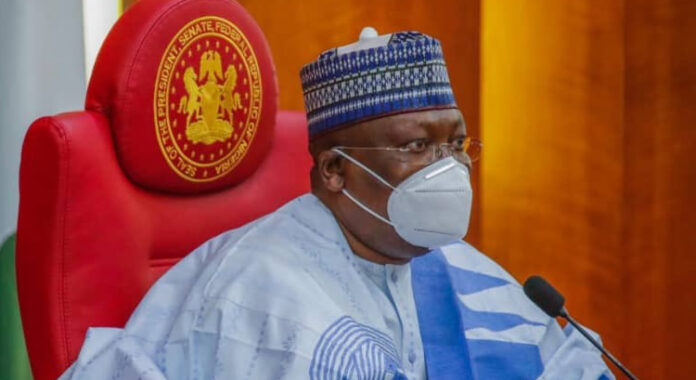 The President of the Senate, Ahmad Lawan on Tuesday inaugurated an ad hoc Committee set up by the Senate to investigate the non compliance with the Petroleum Industry Act and the Oil Mining Lease.

Inaugurating the Committee, the Senate President tasked the members to see the assignment as another great call to service, an investigation to right the wrongs and expose corruption.

Lawan told the committee, “We are all aware that over the years, our country has lost Direct Foreign Investments in the Oil and Gas Sector due to obsolete laws and regulations coupled with the unimaginable corruption in this sector.

“This led to the steps taken by this Assembly to address the ugly situation in the recently passed Petroleum Industry Bill, now an Act, to bring it up to speed with current global realities.

“I want you all to see this investigation as another greater call to service, an investigation to right the wrongs and expose corruption.

“Therefore, you should work assiduously with great patriotism, devoid of fear or favour to unravel the truth in the Joint Ventures Agreement as stated in the motion.

“I can categorically say that this Ad hoc Committee has a date with history. What we do today will certainly shape our tomorrow.

“Government officials must live up to expectation and comply with the laws of the federation in the course of executing their mandates.

“No country will see its laws jettisoned or flouted in order to please investors. We must encourage one another to do the right thing at all times for the good of the nation.

“I also want you to know that the task before you is daunting and challenging but the ability to navigate it lies on your dexterity in handling issues as they emerge.

“Be rest assured that the leadership of the Senate and indeed the entire Senate will continuously give you support in order to succeed in this very important assignment.

“The investors and government officials out there, be rest assured that this investigation is a fact finding, one meant to encourage transparency and good practices in the oil and gas sector.

“The Senate of the Federal Republic of Nigeria will continue to ensure that all laws passed by the National Assembly for the good governance of our country are obeyed.

“We cannot afford to let Nigerians down. Also, be assured that the National Assembly will always welcome good suggestions that will improve the wellbeing of the nation and its citizenry.”

The ad hoc Committee was constituted by the Senate at plenary on 22nd June, 2022 following a motion sponsored by Senator George Thompson Sekibo to investigate the non compliance with the extant laws in the oil industry.