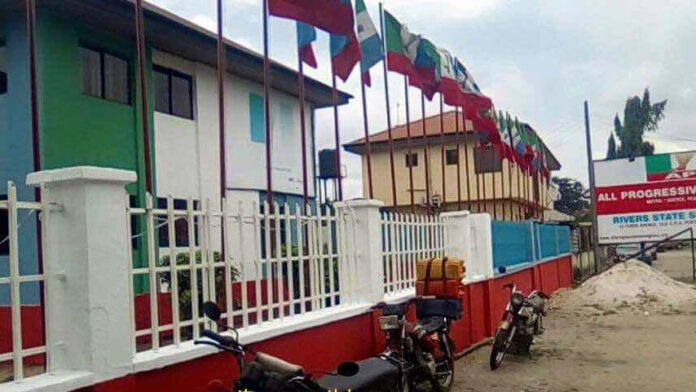 The All Progressives Congress (APC) in Rivers State has commissioned a brand new Secretariat in Port Harcourt,vowing to take over government in the State, come 2023.

Commissioning the project, the Leader of the Party in Rivers State and Minister of Transportation, Rt Hon Chibuike Amaechi said the new edifice has marked the beginning of their journey to government house in 2023.

Represented by former Ambassador to Netherlands, Hon. Oji Ngofa, Amaechi said having sorted out their differences, there are no more impediments stopping them from accessing the brick house in 2023.

He bemoaned the current People’s Democratic Party (PDP) government, headed by Barr. Nyesom Wike for not understanding what governance is all about.This, he said has been displayed through his ‘anti-people policies’ for the past six years.

Also speaking, the former Acting National Chairman of APC and Party Chieftain in the State, Hon. Victor Giadom, said the new secretariat has taken away their griefs and will act as a pathway to government house in 2023.

He thanked the project Committee and the Party Leader, Rt Hon. Rotimi Amaechi for ensuring that the unity of the party is restored.

Giadom restated that APC has the capacity to take over the Government House in 2023.

In an interview with journalists, the Chairman of the Project Committee, Pst Uche Samuel Hakumeru said he sacrificed his time and committment to ensure the completion of the project.

According to him, when the party saddled him with the responsibility of building a new secretariat, he rose to the challenge by mobilising everyone, including his family members to ensure the realization of the mandate.

“I’m happy as Chairman of the Project Committee that  we have delivered on our mandate.

I’m a very busy man, but we had to multi-task ourselves to achieve this vision. This area was swampy, but you can see what we have achieved. I don’t take failure for an answer and it does not run in my DNA, so l embarked on the task and we delivered on our mandate.

“We will always remain grateful to our leader, Rt Hon. Rotimi Amaechi for his support, without which we could not have achieved the success,not forgetting other party stalwarts that contributed in one way or the other to the successful completion of the project.”