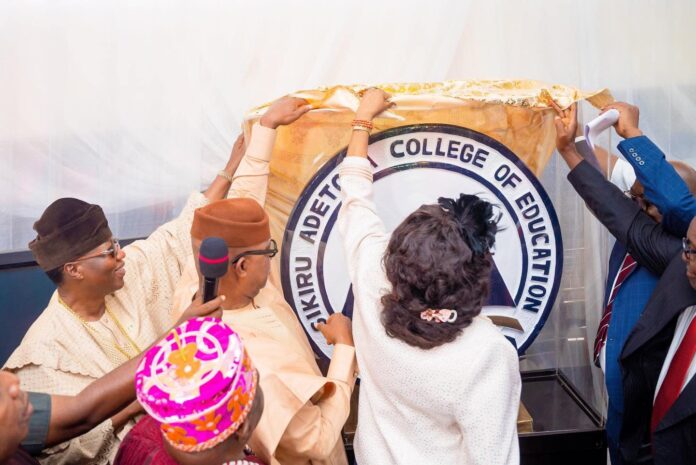 While a number of people have welcomed this development there were few that expressed reservations about the renaming. This group probably thought the name of our late sage, Dr Tai Solarin, was replaced with that of Kabiyesi.

Governor Abiodun will go down in history as a man who saw a problem and, rather than run away from it, decided to face it headlong and tackle the problem. It is important to put the records straight. In 1978, the Ogun state government established the erstwhile Ogun State College of Education (OSCE) as an institution to produce highly qualified middle level manpower to meet the needs in the education sector in line with the Ashby Commission report of 1960.

Following the death of the education icon, Dr Tai Solarin in 1994, the College was renamed Tai Solarin College of Education (TASCE) to honour the distinguished educationist. The College later metamorphosed into Tai Solarin University of Education (TASUED) following an official pronouncement of the then Governor of the state, Otunba Gbenga Daniel, on 29 January, 2005.

The pronouncement was later given the required legal backing via the Tai Solarin University of Education Law, 2005.

The original intention at the commencement of TASUED was to have a university that will subsume the erstwhile college. Hence the law that established TASUED made provision for this. In particular, part IX sections 65 to 69 of the law are very clear on this. Indeed section 69, subsections I and 2 put a legal seal termed “transfer to the University of land, properties and obligations of the College”:

(2) subject to the provisions of this Law, every Deed, Agreement or other instrument or any arrangement whatsoever, to which the College, either by itself or through any other authority or person was a party Immediately before the appointed day shall, as from the appointed day, have effects as if the University had been a party to the same.

The above leaves no one in doubt that the University by right actually ‘inherited’ the name ‘Tai Solarin’.
Sequel to the refusal of the National Commission for Colleges of Education to allow the cohabitation of the College of Education with the University, a situation whereby the Provost, who was supposed to be the Chief Executive Officer of the then College was under the direction of a Vice Chancellor, the College was disarticulated from the University. It was at this point that the College that was being re-established should have assumed a new name. The old name was however retained for some strategic reasons, and the State then ended up with two institutions with the name ‘Tai Solarin’, viz:
Tai Solarin University of Education, Ijagun
Tai Solarin College of Education, Omu-Ijebu.

It is also pertinent to mention that the Ogun State House of Assembly (the 8th legislative house) actually passed a bill that changed the name of the Tai Solarin College of Education to Ogun State College of Education on Wednesday 24th April 2019. The bill was one of the three bills titled,” HB.NO 31/OG/2018- Ogun State College of Health Technology (Amendment) Law, 2018, HB. No 32/OG/2018- Gateway Polytechnic, Igbesa (Amendment) Law, 2018 and HB. No 033/OG/2018- The Tai-Solarin College of Education, Omu (Amendment),Law, 2018
The Gateway Polytechnic, Igbesa which became Ogun State Institute of Technology has assumed the name since then. The crises that engulfed TASCE towards the end of the last administration probably never made it possible for the College to assume the new name.

The law passed in April 2019 was really in response to the need to resolve the confusion that had often accompanied the University and the College bearing Tai Solarin. Official communications often got mixed up.

The renaming was also meant to correct what the law on the re-establishment of the College at Omu-Ijebu in 2008 would have done.

With this development, what we now have in Ogun State tertiary education sector is:
Tai Solarin University of Education (TASUED), Ijagun.
Sikiru Adetona College of Education, Science and Technology (SACEST), Omu-Ijebu

The renaming done by HE Prince Dapo Abiodun MFR is like buying two for the price of one. On the one hand, an age-long confusion in nomenclature was resolved while on the other hand, an eminently qualified personality, Oba Dr Sikiru Kayode Adetona, CFR was appropriately honoured.

Consequently, instead of condemning the action, the governor should rather be commended.