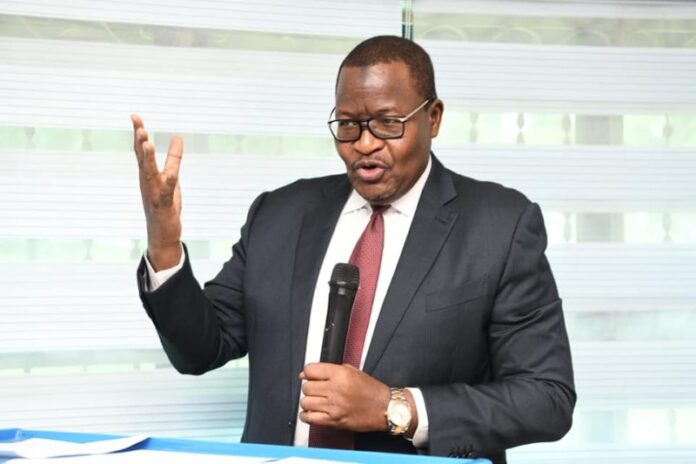 The Executive Vice Chairman/CEO of Nigerian Communications Commission(NCC), has harped on Public Private collaborations as solution to digital infrastructural gap, prequisite for investment and economic growth in the Nigeria’s telecommunications industry.

The EVC stated this when he delivered a Keynote Address titled, ‘Exploring Public Private Collaboration for a robust digital Infrastructure, Regulations, Investment and Policy’ at the 2021 Information Communication Technology and Telecommunication (ICTEL), Exhibition and Conference organized by the Lagos Chamber of Commerce(LCCI) on Tuesday.

He disclosed that with an adequate Public Private Partnership the actualization, realization of the 2030 Agenda for Sustainable Development Goals (SDG) will be attained.

He expressed that the Commission has engaged in several successful collaborations with private sector stakeholders players known as Infrastructure Companies (InfraCo),  Industry Consumer Advisory Forum (ICAF) and other key partnerships.

According to him, “The concept of Public Private Partnership has become one of the commonly used model of collaboration among stakeholders to fast track socioeconomic development whether at the global, regional and national levels.

In April, 2017, the United Nations Industrial Development Organization (UNIDO) and the International Telecommunication Union (ITU) signed a Joint Declaration in Geneva, “on the advancement of the 2030 Agenda for Sustainable Development Goals (SDG), in particular industrialization, infrastructure development and innovation.” The UNIDO and ITU, driving innovation in ICTs together with 193 Member States and over 700 private sector entities and academic institutional membership, planned to strengthen country-level collaborations.

“The two agencies resolved to contribute to global, regional and national efforts toward achieving SDG9, and particularly through action plans that are designed to attract public-private partnerships and investment. The collaboration between ITU and UNIDO, thus, represents a very important commitment from global organisations to deliver measurable and sustainable solutions within countries, towards achieving the SDGs, with a focus on ‘infrastructure, industry and innovation,’ through a PPP arrangement.

“It is on record that this kind of partnership is helping to fast track the realization of SDG9 with derivable quantifiable benefits to industry, including small and medium-sized enterprises in emerging economies.

“Similarly, it is particularly of interest that the African Development Bank (AfDB), in a White Paper on PPP Framework released in September 2020, was emphatic that the infrastructure gap in African countries acts as an impediment to their economic growth and development.

“Following the liberalisation of the telecoms sector in 2001, the Commission has continued to facilitate investment inflow into the country’s digital space through licensing of many private sector players, who are deploying services in different segments of the nation’s telecom market. This has resulted in rollout of massive infrastructure ranging from the deployment of Base Transceiver Stations (BTS) and laying of thousands of kilometres of fibre optic cables to every nook and cranny of the country. Hence, the sector has grown significantly in investment with significant access to an array of voice, data and other kind of enterprises.

“The Commission has also continued to enhance existing infrastructure through the licensing of a category of private sector players known as Infrastructure Companies (InfraCos), who are to deploy fibre optic cable on a wholesale basis across the country with broadband Point of Access (PoA) in each of the 774 Local Government Areas of the country. This InfraCo scheme is running on a PPP arrangement, where the government provides a counterpart fund as a subsidy to stimulate faster, a more robust and resilient broadband infrastructure rollout across the country.

“While broadband penetration in Nigeria has reached 45% at the moment, from less than 6% in 2015, and by that fact stimulating digital activities in the country, there still exist access gaps which the Commission is making efforts to bridge. It is noteworthy that the hitherto existing access gaps of 217 identified in the country have been reduced to 114 through increased collaboration between the Commission and stakeholders in the telecom ecosystem. Hence, the InfraCo project being implemented by NCC and other similar regulatory initiatives which has PPP component are in line with policy expectations of the Nigerian National Broadband Plan (NNBP) 2020-2025; the National Digital Economy Policy and Strategy (NDEPS) 2020-2030; the NCC Strategic Management Plan (SMP) 2020-2024, as well as a number of regulatory instruments and frameworks which envisioned the PPP model as a central organising principle for fast-tracking the development of Nigeria’s telecoms industry,” he stated.