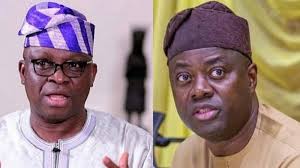 The National working Committee of the People’s Democratic Party (PDP) has moved to end the feud between the Governor of Oyo state,Engr. Seyi Makinde and Former Governor of Ekiti state, Mr Ayo Fayose.

The duo has been on loggerhead over who should control the structure of the party in Southwest. The former Ekiti state Governor has maintained that the Oyo state Governor has no reason to hand pick loyalist without due consultation of leaders.

Nigerian NewsDirect learnt the feud affected the zone from continuing with its earlier scheduled congress as available information indicates the both camps have run to court for help.

In a statement by the Party’s National Publicity secretary and obtained by Nigerian NewsDirect he revealed that the National Working Committee (NWC) of the Peoples Democratic Party (PDP) after an extensive meeting has scaled up processes for reconciliation and as it affects South West Zonal Congress of the party.

It said the NWC will meet on  the outcome of the reconciliation meeting within the next 24 hours.