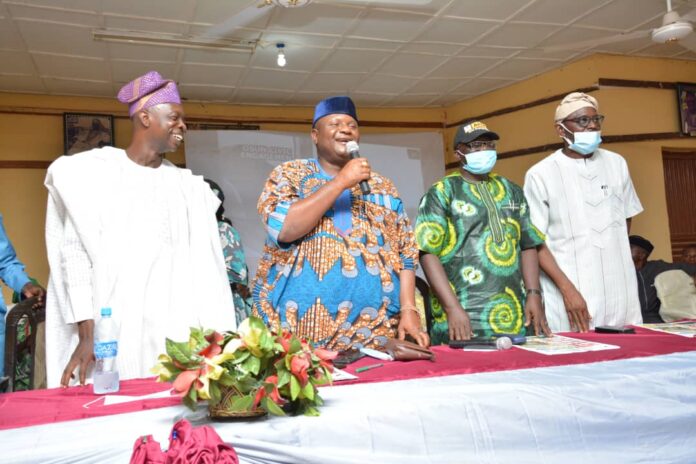 The Caretaker Chairman of Osun State All Progressives Congress, Prince Gboyega Famodun has said the Oyetola-led government is an all-inclusive government.

He equally described the current administration as one which separates politics from governance by considering all and sundry in the authoritative allocation of values regardless of their sectional affiliation.

The Chairman said the above during a meeting with informal groups and farmers organized by the Special Adviser to Governor Adegboyega Oyetola on Civic Engagement, Hon. Olatunbosun Oyintiloye at Igbajo Town Hall, Boluwaduro Local Government.

Famodun who underscored the uncommon administration of Oyetola as democratic, participatory and fair, noted that the governor has shown his fat democratic credentials through his unique way of engendering people-centred policies and programs where his political sentiment doesn’t hold sway. 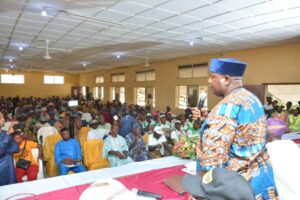 “All his formation of policies and programs reflects even distribution of wealth which is one of the core tenets of political equity and utilitarianism, as no community is left out in governance process.

“Under Oyetola, every community now has a functional health care system, as each local government has an advantage of accessible roads which make life comfortable for them.

“Empowerment programs are being rolled out for the vulnerable, regular emoluments are being paid to the workers and pensioners even as the employment of capable hands into schools is underway.

“Although this is an effort in progress but the current administration will not relent unless there is a large spread of value-added benefits in the state”, he added.

Famodun commended the Governor for constructing Ada – Igbajo Road within the shortest possible period after the good people of the area sought for it.

Speaking at the event, the Obanla of Igbajo Land who doubles as the Regent, High Chief Michael Ajibodu eulogized Oyetola for his focused and productive leadership in the state, commending him for the speedy delivery of Ada-Igbajo road which had been in a bad shape for almost three decades.

While appealing to the government to do more in terms of road construction, provision of potable water in other neighbouring towns and empowerment for youths and women among other benefits, he restated the support of Boluwaduro for his administration.

At the event, the cross-section of farmers and artisans applauded Oyetola’s administration for its value-driven and people-centred policies and programs which had made life better for them, as they entreated the government to help them provide more agricultural inputs, soft loans and grants among other necessary supports which would serve as a boost for their businesses.

In his remarks, the Special Adviser noted that the governor will not renege on the promises made to the good people of the state, as that can be seen in his frantic efforts to give a turnaround to all sectors of the state economy despite the lean resources.