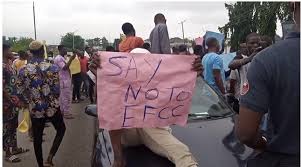 There was palpable tension in Osun State as some suspected internet fraudsters popularly known as  ‘Yahoo-boys’ took to the streets of Osogbo on Tuesday morning to protest incessant arrest by the Economic and Financial Crimes Commission (EFCC) in the state.

Nigerian NewsDirect gathered that operatives of the EFCC stormed the state on Monday evening to arrest some internet fraudsters.

It was learnt that the Yahoo boys resisted the arrest and started a bonfire at Lameco filling station around 5 a.m. in Osogbo.

The protesters were armed with placards saying ‘Say no to EFCC, Probe Magu, no job opportunities’ among others. The suspected fraudsters marched en masse and blocked the entrance of the Government House and also restricted vehicular movement.

This protest is coming barely three days after the Yoruba self-acclaimed activist, Adeyemo Sunday popularly known as Sunday Igboho openly declared support for the internet fraudsters in Osogbo during a Yoruba nation rally.

Reacting to the incident, Police Public Relations Officer, SP Yemisi Opalola said the command has been managing the situation since the early hours of Tuesday, noting that it is under control.