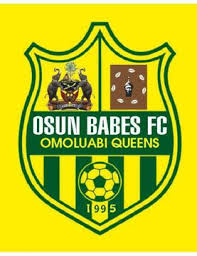 Layi Adesiyan, Osun Director of Youths, Sports and Special Needs, told Newsmenin Abuja on Wednesday that the players were determined to participate in the African Champions League.

The tournament will be organised by CAF and willinvolve top women’s clubs in Africa.

The director said the girls started this season with a good performance by showing their talent in their first match by defeating the Ibom Angels 1-0.

“They are determined to participate in the CAF but they need to continue with the spirit of good fight.

“They need to work as a team to achieve their target; with seriousness, dedication and determination their dream will come true.

“They have played four matches now; we will continue to give them all the necessary support that will make them give their best in their remaining games.

“They must remain focused and take it one game at a time till they get there. We will also support them with prayers,’’ Adesiyan said.

Newsmen reports that in Match Week One, Osun Babes defeated Ibom Angles 1-0; lost 1-3 to FC Robo Queens of Lagos in the second match.

They beat Pelican Stars FC 3-1 in their third game and in the fourth match, they lost 0-1 to Royal Queens FC.

Presently, they are fifth on the table with six points.

Bayelsa is first with 12 points while FC Robo Queens is second with nine points.

The winners of the 2020/2021 NWPL, which started on Dec. 9, 2020, will represent Nigeria in the West African Football Union (WAFU) qualifiers for the CAF Women’s Champions League.

Winners of the qualifiers will compete with six other regional winners alongside the host team and a wild card entrant in the eight-team Champions League.