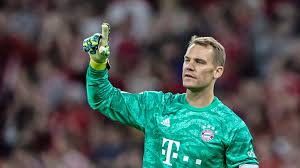 Neuer’s confidence is in spite of the 2014 FIFA World Cup winners ending last season with a 0-6 loss in Spain and the ongoing debate over Coach Joachim Loew.

“I trust us to do everything,” the 34-year-old world goalkeeper of the year told the federation (DFB) homepage on Wednesday.

“I am a positive person; I believe in us, I believe that we have the opportunity to play a good role at the Euros.”

Neuer and his teammates last played in a UEFA Nations League humbling in Spain in November.

It brought Loew’s position under question —– though it was then decided he would lead Germany into Euro 2020.

“We know how important the mentality of the team is at a tournament, the togetherness in the group,” said Neuer.

“My task and that of every leading player is to be sensitive and act against any possible negative developments.

“Becoming European champions is a big goal, a paramount goal. Every one of us is responsible for doing everything he can to bring the performance he can in summer.”

“We have to take these games seriously but they must also serve to play us into the Euros in summer,” said Neuer. “We have few other chances due to the compact match calendar.

“We cannot let time disappear rather we must be alert and use every opportunity,” added the Bayern Munich goalkeeper