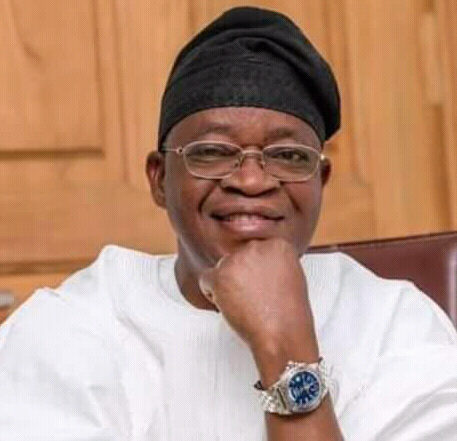 My call for unity in Osun State started from day one, which is essentially to ensure we do not allow our grievances to ‘recruit’ enemies for Governor Gboyega Oyetola, my intentional endeavor to drive this laudable agenda didn’t just start now, it has always been my passionate and genuine concern since inception. Let me repeat this for the umpteenth time, Governor Oyetola needs more friends than enemies.

At a time like this, the need for us to ensure we don’t allow our grievances to becloud our sense of reasoning must be deepened and we should also not overlook all those giant transformation our party has brought to the State to better the lives of the people and of course without prejudice, these key milestones of our leaders and in the most recent, Governor Adegboyega Oyetola cannot be overemphasised.

As a lover of history, kindly permit me to refresh your memory a bit; history has shown that, where acrimony and negative insinuations are allowed to thrive, the end result is always a regrettable disaster. Those with the benefit of hindsight would recall that the famous Action Group (AG), founded by Awolowo as a Centre-left party in Ibadan on March 21, 1951, became polarized immediately the Samuel Ladoke Akintola faction pulled out of the arrangement.

In a wink, ‘Egbe Olope’ went on its knees and it never regained its vigor until the military struck in 1966. In fact, that was what prompted most of the unappeased members of the defunct AG to join the National Party of Nigeria (NPN) in 1978, to the disadvantage of the Unity Party of Nigeria (UPN).

Even, Ogbomoso,  Akintola’s hometown, never forgave Awolowo. The tragic truth is that the political animosity between ‘Awo’ and ‘SLA’ (as Akintola was fondly called) has now gravitated into what looks like a generational transfer of hatred. This is our own time, we are more civilized and exposed, we must never allow animosity to thrive, our unity in Osun State must never be compromised.

More pointedly, unity is key in everything we do, it builds tolerance towards difference which yields cooperation. Cooperation as a value brings forth growth alongside many other attributes such as integrity, freedom and most importantly, patriotism and progress which is what our party stands for. Unity is also the secret spice for a solid foundation for democracy. Unity promotes development across all ramifications of the society, be it social, economic, political etc. Unity equals good guidance and we never extinct it in our great State.

As a guide to our political actions and decisions at a time like this in Osun State, we should not forget the pains and the agony that were experienced by APC in both Oyo and Edo states respectively. These experiences are better imagined.

However, we cannot pretend we’re not aware of the unhealthy rivalry bedeviling our party in the state which I believe is surmountable. Nevertheless, in my objective view as a true party man, I found it most appropriate to extend profound respect to our great leader, Ogbeni Rauf Aregbesola, a grassroots politician that I deeply admire a great deal; not only for his doggedness but also for his accomplishments in office as a two-term governor of Osun State.

There is no doubt that Aregbesola completely changed the face of our state in all ramifications during his tenure in office.

Interestingly, the people rewarded him with massive support and goodwill in office. Undoubtedly, he is a pathfinder and visionary leader who still has a great deal to offer our beloved nation. Meanwhile, he must intensify his effort to ensure that the house he once built remains in order, and urgently too.

Whatever was the politics behind the nomination of Oyetola to contest the last governorship election in the state must be put behind, the election is over now and we need to forge ahead especially now that we’re in a new election year. Thankfully the Governor has been most worthy of the high office, and that should be a plus to the Honourable Minister (Aregbesola) in having a worthy successor.

Meanwhile, irrespective of the ”camp” we may belong, none of us can dispute the unique administrative prowess in Governor Oyetola. Our supposed hate and blindness should stop now. We are fighting each other only because we have something to fight. Lets not lose focus of the bigger picture which may surreptitiously allow the opposition to capitalize on our weakness and boost their own strength at the expense of our party. We must not forclose reconciliation, this is necessary and must as well be immediate.

Additionally, let’s reconcile without creating a lame duck in our leadership structure. The competency of Governor Oyetola must not be underated and his virtues must equally be celebrated and appreciated.

This is the beginning of a new dawn. This is the beginning of a truly united Osun State. This is a wake-up call for all critical stakeholders of our party at Units, Wards and Local Government levels. Let us endeavour to live out the true meaning of our name, PROGRESSIVES, as I close with this quote by Gerald R Ford- ‘let us remember that our unity is a priceless asset.’

*Rotimi Makinde is a former member of Federal House of Representatives and a key member of SWAGA’23.*