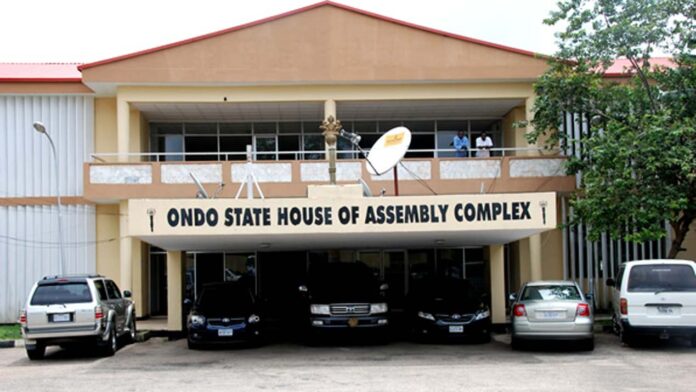 Ondo State House of Assembly, on Tuesday, screened and confirmed the four commissioner-nominees sent to it by Gov. Oluwarotimi Akeredolu.

Our Correspondent reports that Akeredolu had, on March 3, sent the names of the nominees to the assembly for confirmation, through his Chief of Staff, Olugbenga Omole.

Our Correspondent also reports that all the nominees had served in one capacity or the other during Akeredolu’s first term in office.

While Akinterinwa served as Commissioner for Finance, Olayiwola was Special Adviser to the Governor on Lands, Works and Infrastructure, while Ojogo and Titiloye were Commissioners for Information and Orientation, and Justice respectively.

Mr Emmanuel Ogunmosaluyi, the Majority Leader of the assembly, moved the motion for the consideration and adoption of the nominees, and was seconded by Mr Festus Adefiranye, representing Ile-Oluji/Okeigbo constituency.

In their various contributions, the lawmakers, especially those from the nominees’ constituencies, said they were all capable of serving in any given capacity.

The assembly also confirmed the nomination of Mr Bayo Olafusi by the governor as a member of the State Judicial Service Commission.

In his remarks, Mr Bamidele Oloyelogun, the Speaker of the assembly, called for the cooperation and support of his colleagues in moving the state forward.

According to him, it is only in an atmosphere of peace that the state can thrive.

Oloyelogun described the commissioner-designates as people with good antecedents, adding that they were all qualified to serve the state in whatever capacity.

In another development, a bill to establish the Ondo State Drugs and Health Commodities Management Agency scaled second reading at the assembly.

Our Correspondent reports that the speaker urged members of House Committee on Health Matters to do justice to the bill.

He said the bill, when passed, would discourage fake and expired drugs in the state.

Oloyelogun added that it would also reduce the cost of drugs and make them readily available for use in the state.