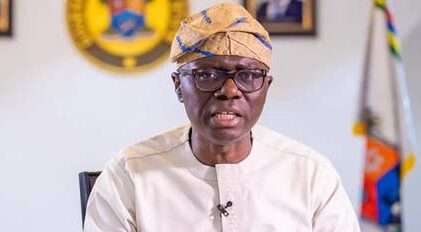 …As Govt shuts down school till January

Lagos State Governor, Mr. Babajide Sanwo-Olu has mourned the  death of a number of students of the Ojodu Grammar school, who were crushed to death by a truck driver on Tuesday, saying the mishap was avoidable.

The Governor who in a condolence message on the happening described the demise of the students as ‘sad, unfortunate and avoidable,’ sympathised with families of the bereaved students, their relatives, friends, management and staff of the Ojodu Grammar school.

A press statement signed by his Chief Press Secretary, Mr. Gboyega Akosile on Wednesday, quoted the Governor to have said: “I commiserate with the parents, management, staff and students of Ojodu Grammar school over this unfortunate death of our students, whose lives were cut short by a truck driver yesterday.

“The sad incident has left me devastated since yesterday because it is terrible to hear about the death of innocent children, especially in a clearly avoidable circumstance like what happened yesterday.

“As a parent, words cannot express how shattered I was when I learnt about the incident. No one’s life, including those vibrant students, who were returning from where they had gone to learn for a better future, deserved to be ended in that manner.

“My deepest sympathies go out to their parents. I pray that God will grant them the fortitude to bear the irreparable loss.

“Our prayers are also with the survivors, who are receiving treatment at the hospitals.

“Meanwhile, we have immediately ordered that the affected schools be shut down till January, while investigations are ongoing. The erring driver has also been arrested.”

Meanwhile, the Lagos State Traffic Management Authourity (LASTMA) has denied the alleged involvement of its officers in the mishap, maintaining that it does not have a traffic management duty post around the accident scene.

According to a statement by the traffic enforcement authority, signed by its spokesperson, Filade Olumide, the General Manager, LASTMA, Bolaji Oreagba averred that “from the reports we received on the incidence, the driver is believed to have lost control of the vehicle, probably because of mechanical reasons. The police are investigating the matter; the public should await their report.”

The statement read in part: “The General Manager of Lagos State Traffic Management Authourity (LASTMA), Bolaji Oreagba has categorically disowned the unsubstantiated allegation that officials of the agency were involved in the unfortunate truck accident that crushed some students on their way home from school on Tuesday, 7 December, 2021.

“The General Manager further said that in the various unconfirmed reports in some media, not only LASTMA as an agency was fingered but some other government traffic control agencies and wondered how all these agencies would be in pursuit of one truck, a truck that could be apprehended at a later date, that is, if it had committed any traffic infraction.

“He advised that the media should refrain from rushing to the press with unsubstantiated reports, all in a bid to be the first to break the news — news that could engender public distrust before the revelation of the facts.

“Oreagba commiserated with the families of the students that lost their lives and pray for the quick recovery for the injured. He also said that we all have the responsibility of making our roads safe for everyone, by strictly adhering to all motoring and traffic rules and regulations that have been put in place.”

Meanwhile, the State Government has called for calm disclosing that two students were confirmed dead on the spot while about 12 students, 7 Females and five Males were recuperating having sustained varying degrees of injuries.

The State Government has said it would be responsible for the medical expenses of all the students.

The Government also confirmed that some students who had slight injuries have been discharged.

A statement from the State’s Ministry of Education, signed by Assistant Director, Public Affairs, Ganiu Lawal, on Wednesday, confirmed that students of the schools have been asked to stay at home until school resumption in January 2022.

“In the meantime, arrangements are being made for trauma counseling sessions for students and teachers in person and via helplines,” the statement read partly.