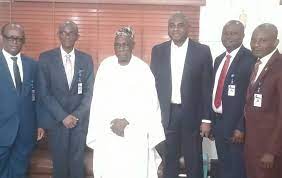 Babcock University was named after an American missionary by the name of David C. Babcock, who pioneered the work of the Seventh-day Adventist Church in Nigeria in 1914.

The former President spoke during his visit to the President/Vice Chancellor of the University, Prof. Ademola S. Tayo at the main campus, Ilishan on Wednesday.

A release by the Special Assistant on Media,  Kehinde Akinyemi stated that Obasanjo, who also attended the 2022 Graduation Lecture of the institution restated that the problem of Nigeria is beyond an individual, but a collective resolve.

Responding to the electricity challenges of the institution, Obasanjo advised the management to consider converting their diesel generators to gas powered system.

He promised to continue to be part of the growth and development of the University anytime “I am called to do so. Over the years, the growth here has been phenomenal.”

Earlier, the President/Vice Chancellor briefed Obasanjo on the about 11,000 students capacity institution, stressing that the major challenges was electricity supply.

According to him,  “We spent about N100m monthly on diesel now and this is telling on our finances,” Tayo hinted.

He disclosed that the story of the University would not be completed without the contribution of Obasanjo, saying only God can only appreciate him more.

The President/Vice Chancellor subsequently took the former President on a short tour of the campus.

Obasanjo as the Special Guest of Honour at the graduation lecture remarked that the solution to the mirage of country’s problems cannot be solved alone by an individual.

The former President, who was responding to the lecture delivered by Professor Kingsley Moghalu on “Knowledge, Vision, Passion and Innovation in the Context of Nigeria Development,” said, “The situation of the country is so bad for any one to claim of having solution to them.

“The situation today, is beyond party politics, beyond political parties. It require all hands on deck for us to get it right,” adding that understanding, love, compassion, fear of God, continuity and patriotism were also key factors needed to move the country to new development.

The university was established as the Adventist College of West Africa (ACWA) in 1959, initially with seven students; who were hosted at the home of Chief Olufemi Okulaja.

In 1975, it changed its name to Adventist Seminary of West Africa (ASWA). The university was officially inaugurated on 20 April 1999, thus becoming a pioneer private University in Nigeria under President Olusegun Obasanjo.