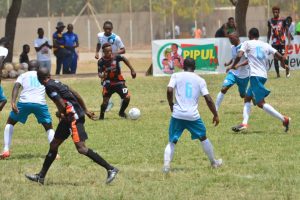 Otasolo International Football Club began their campaign in the 2020/2021 Nationwide League One (NLO) Division One on Monday in Ilorin by beating Ahmadu Bello University (ABU) FC of Zaria 4-2.

Samuel Ogunjimi put Otasolo in the lead as early as in the 10th minute in  spectacular fashion before Jamilu Usman, who scored a brace, pegged them back in the 22nd minute.

Dominic Abah restored Otasolo’s lead 15 minutes into the second half, before Edward Nwachukwu made it 3-1 eight minutes later.

In the 78th minute, a player of ABU FC was brought down inside Otasolo’s penalty box and Usman scored the penalty kick to reduce the tally.

Inside the last 10 minutes of the match, John Peter restored Otasolo’s two-goal lead when he capitalised on ABU FC’s defensive mishap to make it 4-2 in the 81st minute.

In another group’s match played at the Kwara Football Academy (KFA) pitch, Knight FC of Ile-Ife in Osun lost 0-1 to Seat of God FC of Kaduna.

Michael Olorunfemi scored the only goal of the match in the 24th minute of play after a perfect team play.

Reports state that other teams in the Ilorin Stadium centre include FC Esperance of Ekiti and Vet Rovers FC of Vom in Plateau.

Others are EKSU Galacticos of Ekiti, FC Ebedei of Ogun, Remo Stars FC of Ogun and K.J. United of Kaduna.

At the KFA pitch group are Olukismet FC of Ekiti, Knight FC of Ile-Ife and Mighty Jets Feeders FC of Jos.

The rest are Kaduna United FC, Seat of God FC of Kaduna State and Hamola FC of Osun.