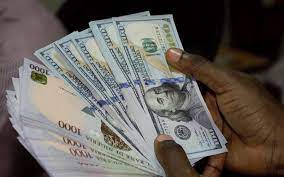 After gaining slightly on the first trading of the week, the Naira on Tuesday relapsed against the US Dollar to cat the Investors & Exporters window of the foreign exchange market on Tuesday,

The Nigerian currency, which opened for trading yesterday at N410.71 to a dollar eventually closed at a depreciated rate of N411.63 per dollar as against N411.50 that it closed at the trading session of the NAFEX window on Monday.

Data obtained from the FMDQ Security Exchange window where forex is officially traded on Tuesday showed that the local currency (naira), declined marginally by 0.03 per cent when compared the closing figure with N411.67 that it traded in the previous session.

The forex turnover, also, declined significantly to $58.88 million while compared with $111.53 million recorded on Monday and $203.42 million posted in the preceding session on Friday last week.

However, Nigeria’s naira remained unchanged against the U.S. dollar at the unofficial market on Tuesday, data posted on Niajabdcs.com, a website that collates parallel market rates in Lagos showed.

Meanwhile, the Brent crude recorded a 1.1 per cent rise, making it the highest since March 8, while U.S. crude futures briefly hit $67 a barrel. The global benchmark has not had a sustained period above $70 since 2019.

Crude oil price had been on serious decline globally in the wake of the coronavirus pandemic.

The decline in oil prices affected several economies globally, particularly countries like Nigeria which depend largely on crude oil earnings.

Despite contributing eight percent to Nigeria’s gross domestic product (GDP), crude oil accounts for over 90 percent of Nigeria’s foreign exchange earnings. Oil prices have been showing signs of recovery amid vaccine roll out.

The 2021 budget, which was signed by President Muhammadu Buhari on December 31, 2020, was based on an oil price benchmark of $40 per barrel and a production level of 1.86 million barrels per day.