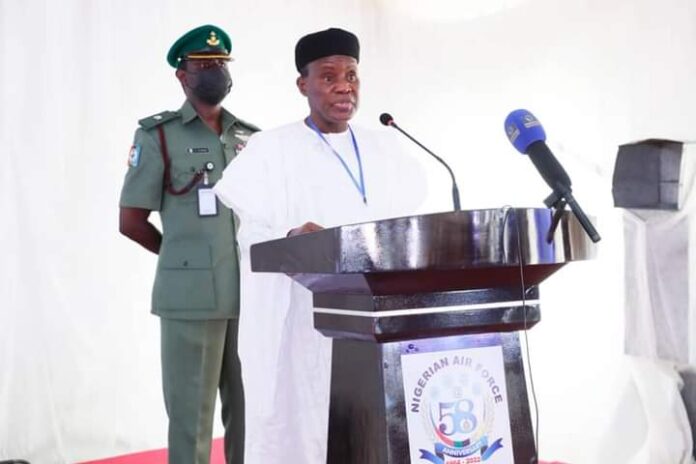 The Nigerian Air Force (NAF) 58th Anniversary celebration kicked off on a high note with the Honourable Minister of Defence, Major General Bashir Magashi (Rtd.) stating that increased levels of successes by the Armed Forces of Nigeria (AFN) can be attributed to the improved levels of synergy and cooperation among the Services,

He stated this while declaring open the NAF Day Anniversary Celebration 2022 Seminar held at the NAF Base, Kano.

The Minister also noted that the theme for the Seminar, ‘Enhancing NAF’s Operational Efficiency in Joint Operations for Effective Response to Contemporary National Security Imperatives’ this would address operational challenges being experienced in the field particularly in the areas of air to ground integration and Unmanned Aircraft Systems optimization in the theatres.

The Minster also stated that the despite its limitations, the NAF since its inception, has commendably carried out the core functions of protecting Nigeria’s air space and providing support to surface forces.

In doing so, he noted, the NAF has always displayed the highest level of professionalism and shown great resourcefulness in the areas of manpower management, Research and Development and in air operations execution.

Major General Magashi (Rtd.) also reiterated the commitment of the President Muhammadu Buhari-led administration towards revamping the fortunes of the NAF and the AFN in general.

According to him, ‘Today, the fleet of the Nigerian Air Force have been reinforced with several platforms which have improve its Intelligence, Surveillance and Reconnaissance as well as attack capabilities and extended the reach of the Armed Forces.”

He then called on the NAF and the AFN to renew their commitment and determination to play their part in addressing the security challenges threatening the peace and progress of the Nation.

In his welcome address, Chief of the Air Staff (CAS), Air Marshal Oladayo Amao noted that since assuming office, President Muhammadu Buhari has fully supported the AFN in general and indeed the NAF in particular to enable them achieve their set objectives.

Accordingly, the Federal Government has committed substantial national resources to enhance the overall capabilities of the Armed Forces in a bid to addressing the security challenges in various parts of the country.

This, he said, has not only succeeded in ameliorating equipment constraints experienced in previous years and the attendant implications of such constraints, but it has also spurred NAF personnel to be more committed to the decimation of subversive elements, who seek to undermine the peace, progress, unity and faith of Nigeria.

Air Marshal Amao also stated that the theme of the seminar was timely as the seminar will enable the NAF appraise its current efforts while further repositioning itself to continuously project air power to definitively meet its constitutional mandate.

He went on to state that the seminar stood out among other activities lined up for the celebrations as the deliberations were expected to produce tangible strategies going forward in NAF operations.

He then expressed confidence that the discourse will spur better ideas for the NAF to be more effective in the discharge of its responsibilities.

The CAS then specially recognized and appreciated the unflinching support of the President Muhammadu Buhari GCFR, without which NAF’s achievements would have been unrealisable.

He also expressed deep appreciation to the Executive Governor of Kano State, His Excellency Alhaji Abdullahi Umar Ganduje for his continued support to the NAF in Kano and to the Special Guest of Honour, the Honourable Minister of Defence for his guidance and encouragement.