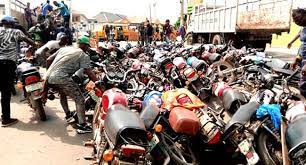 The Secretary General of the Lagos State Arewa Community (LASACOMM), Alhaji Musa Saleh, has said Lagos State Government and the Association of Arewa Okada Riders has come to a common  ground towards the implementation of extant rules and documentation of all riders in all Local Governments of Lagos State.

This is coming after the order from Lagos state Governor, Babajide Sanwo-olu, restricting all commercial motorcycle (Okada) operators in some Local Governments in the state.

In a press release signed by Musa yesterday, his association was in total commitment and support of the administrative policies of the Lagos State Government in getting rid of all security threats, promoting peace and tranquility, safeguarding lives and properties of Lagos and the massive provision and development of infrastructures facilities for all Lagosians.

He called on the Arewa Community members to comply to the order by  avoiding the Local Governments of Apapa, Surulere, Lagos Island, Lagos Mainland, Etiosa and Ikeja, emphasising that they should be law abiding citizens

“We condemn in totality the activities of all criminal elements who are  mostly foreigners from Niger Republic, Chard, Cameroon and other Neighbouring countries who have infiltrated the ranks of those  genuine ridders  and thereby  perpetrating all forms of crime in Lagos state and are constituting  serious threats to the lives and properties of Lagosians.”

“We are calling on the Security Agencies to identify and arrest all those criminal elements masquerading as Okada ridders.

“We are also tasking the Nigeria Immigration Service to step up its actions along the border line in checking the influx of those foreign elements coming into the Country without genuine intention.”

Musa concluded by thanking the Lagos State Government for supporting several developmental programs and appealed to the government for continuous support.