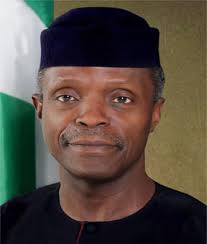 The `Made in Nigeria Project’ group has commended Vice President Yemi Osinbajo on his commitment and support for the growth of small businesses in the country.

Osinbajo’s spokesman, Laolu Akande, in a statement on Monday in Abuja, said the vice president received members of the group led by Mr Adedeji Alebiosu, on a courtesy visit to the Presidential Villa, Abuja.

The group, representing a coalition of MSMEs in Nigeria, was at the Presidential Villa to commend the Federal Government and appreciate the vice president’s support for MSMEs in the country over the past seven years.

Alebiosu acknowledged the contributions of the vice president through key interventions supervised under his office.

He said that the interventions had positively impacted small businesses in the space.

“Initiatives supervised by your office such as the Micro Small Medium Enterprises (MSMEs) Clinics, the Survival Fund, and the MSMEs Awards, among others, have positively impacted many small businesses over the years.

“You have done so much in the MSMEs space in the country, we have never had it so good, that is why we are here today to show gratitude for the support the Federal Government has given to MSMEs in Nigeria,” he said.

Alebiosu said the visit to the vice president underscored the importance of collaboration and partnership in growing the MSMEs space in the country.

Osinbajo, in his response, said that the momentum built on the MSMEs sector by the Federal Government in the last seven years must be maintained given its crucial position in the economy.

“We must be as determined as possible going forward in maintaining the momentum built over the years in the MSMEs space.

“How we sustain the MSMEs Clinics, how it is institutionalised in a way that the incoming vice presidents or presidents are obliged to pay close attention to whatever is happening in the sector is very important.”

Osinbajo assured stakeholders that the Federal Government would create an enabling environment for the incoming administration to step into the positions already created in the MSMEs space.

On the ‘Made in Nigeria’ concept and the need to develop local capacity, the vice president said it was worthwhile.

“We must find where we fit in, in that value chain.

“It is true that no economy can be entirely self-sustaining but it is important to emphasise that we have the capacity to do a lot in our country.

“What we need to do is to find our comparative advantage and develop capacity in the value chain around the manufacturing of electric vehicles, arms manufacturing.”

According to him, there is a bigger challenge in manufacturing of items, creating jobs and wealth; hence the need to think in terms of scale.

“There is a lot of real and serious work that needs to be done. What should our approach be in terms of the value chain? We are a huge economy and a huge market.

“The problem people have always faced is how to engage our massive population in a meaningful way because anything you do seems like a drop in an ocean due to the enormity of the problem,” he said.

The group presented an Award of Excellence to the Vice President.