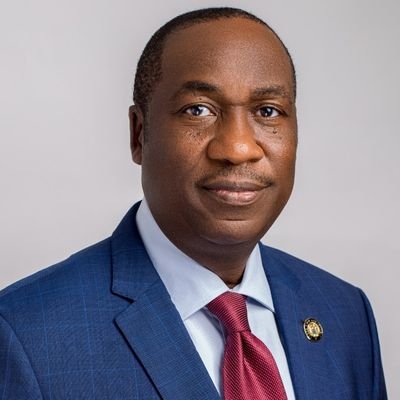 Three years shy of hitting the diamond jubilee, the life of the tech savvy Deputy Governor of Lagos State, Dr Obafemi Hamzat could arguably be said to have been one of a kind immersed in uplifting humanity and making positive difference in the life of the people.

The life of Dr Obafemi Hamzat born 57 years ago, as an highly sought-after brilliant expert in ICT as well as in his political career has been that of a dazzling colour simply because his focus in life is firmly rooted in using his God’s given capacity and resources to make life a lot better for the people.

It was therefore not surprising that the highly gifted National leader of the All Progressives Congress (APC) and former governor of Lagos State, Sen. Bola Ahmed Tinubu, some years back spotted the uncommon leadership traits in Obafemi and thus dragged him into politics.

Obafemi, though born into a politically active family having a father that had once been a lawmaker at Lagos State House of Assembly and one time Commissioner for Transportation,  had taken himself as someone not cut out for politics and had buried himself in his education until his chance meeting with Sen. Bola Ahmed Tinubu during his governorship tenure in Lagos State.

Sen. Bola Tinubu must have felt that such an hardworking and brilliant young man pursuing his career with so much passion particularly as it related to using ICT to solve problem would undoubtedly be an asset to the desire to make Lagos State a centre of excellence.

And true to the expectations of the national leader of APC, Dr Hamzat had through superlative performance and robust contributions to good governance maintained a steadied rise in the political firmament of Lagos State.

In 2005, Hamzat after joining the government of Sen. Bola Ahmed Tinubu was made Commissioner for Science and Technology and at the exit of this government in 2007, he was again retained in this seat by the succeeding administration of Mr. Babatunde Raji Fashola SAN till 2011.

He was said to have used this period to help the ever growing Lagos State to compute its data such that many ghost workers who had been bleeding the state government of millions of naira monthly were weeded out.

Hamzat’s passion for excellent delivery was said to have been the reason why he was drafted to Ministry of Works during the second term administration of Mr. Babatunde Raji Fashola SAN, the incumbent Minister of Works.

The success stories of Fashola led government in Lagos State especially in the area of infrastructural development are all there to truly confirm that Hamzat remained an achiever and who always leaves behind legacies of astounding achievements.

He had tried to succeed Fashola in 2015 but narrowly lost the ticket to Mr Akinwunmi Ambode and as a true democrat, he had forged ahead waiting for another opportunity until he was picked by the party as the running mate to Mr Babajide Sanwo-Olu in the build up to 2019 elections.

He has no doubt in the last two years been a very trusted ally and dependable partner in the quest of Gov Babajide Sanwo-Olu to make Lagos State a true centre of excellence in all sectors.

Unlike the stories of betrayal, mistrust and frosty relationship that usually characterise the office of the governor and deputy governor and thereby making governance to suffer, Dr Hamzat has remained his unassuming self doing all that are within his purview to ensure that Lagos State prosper the more.

Many are of the opinion that Dr Obafemi Hamzat who bagged his PhD at the young age of 26 is another God’s gift to this generation and Nigeria because of his avowed commitment to advancing the greatness of the country through selfless service.

The Deputy Governor’s philanthropic acts are also acknowledged to be legendary and he is said to be a politician who cares so much for a greater tomorrow for the youth.

Obafemi Hamzat was born on September 19, 1964 in Lagos into the family of Late Oba Mufutau Olatunji Hamzat and Late Alhaja Kehinde Hamzat who is from Iga Egbe, Lagos state.

His father, Late. Oba Mufutau Olatunji Hamzat, the Olu of Arowora Sogade, Ewekoro local government area of Ogun State served as a member of the Lagos State House of Assembly and as a Commissioner for Transportation in the state between 1979 – 1983 before becoming the Vice-Chairman, SouthWest of the Alliance for Democracy (AD).

Obafemi’s father was to later become the Lagos West Senatorial District leader of the Action Congress and a crowned king through his maternal royal lineage.

He worked at RTP Consulting Services, Columbia University, Merrill Lynch Inc, Morgan Stanley and later Oando Plc and served as the Chief Information Officer and Group Head IT Strategist from where he joined the Lagos State government as the Commissioner for Science and Technology in 2005.

We wish Dr Obafemi Hamzat another fruitful year of bliss and greater fulfilment in the business of moving Lagos State forward.