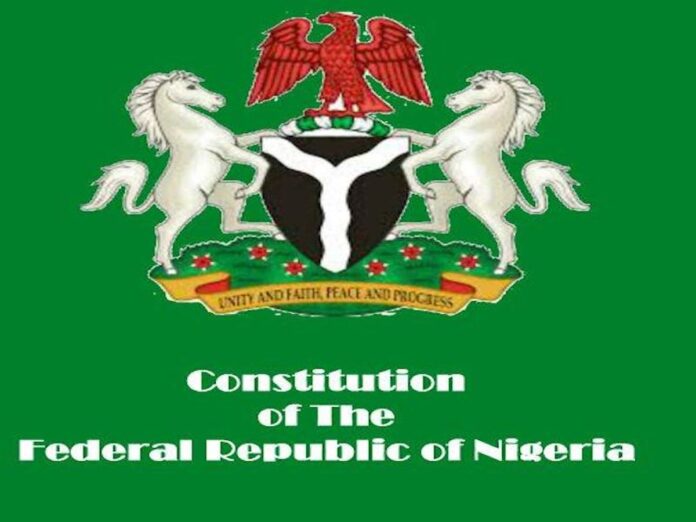 Questions as to why situations continue to wax gross across various endeavours of socio-economic and political sphere in Nigeria, have been traced by keen observers to the manifestations of institutional failures to meet up with the demands of new realities. The perceptual assessment of the grounds of this position hold sway in the fact that the legal expression that gives structural backing to these institutions are creature of archaic statutory provisions which have outlived their relevance. It has critically been observed that the working patterns of government institutions directing the course of political and administrative affairs of the Federation are creatures of decades, which have failed to meet up with what present situations in the Country demand. In this light, clear notation will be given to constitutional development in Nigeria, which since after the colonial era were largely instruments of military juntas crafted to more or less attend to immediate pressure without profound foresight to what holds in the future.

The 1999 Constitution of the Federal Republic of Nigeria, which is the operating legal framework galvanising the course of the Federation, is apparently a product of such crash endeavour. It is glaring that what the present poses before the Federation, is apparently not what the existing legal document can address. In a nutshell, situations have overrun the relevance of the working architectures of the legal document. The incoherent moves towards modifying the Constitution to move up to what the present demands for, is one subject of burdens of thoughts.

The call for the modification of the constitution has not received the required energy needed to drive it through. It appears some elements who are benefiting from the prevailing distraught arrangement, may be constituting themselves so hard as barricades against any meaningful progress to redress failing structures by statutory modifications. The call for a national conference towards birthing a new legal architecture to drive the operation of the Federation in the light of new realities, have more or less received a stiffening resistance. The call for the adoption and implementation of the 2014 National Conference report has been strategically gunned down, just as the resolutions and terms of reference of the conference which gulped billions of Naira, is as good as being dumped under the carpet. However, these hostilities appear largely to be troubling the Federation with waving storms which recently is pushing the entire country off the radar of a balanced lane. From the political to the socio-economic sphere of jurisdiction, the effects have only continued to portend troubles which are manifestations of the defects of decaying institutions.

From the polity angle, several statutory provisions which have outlived their relevance have increasingly been pitching the polity towards imbalance and deficiencies, debilitating the workings of governance in the Country. It is apparent that the foundations of the constitution have embedded in it, some instruments which are deficient, non-proactive, insufficient, and irrelevant to running the demands of the core tenets of a democratic system. The practice of democracy in the Country has largely in this line suffered the fate of remaining infantile, as these instruments apparently are counterproductive to what the present demands.

Elections in any democracy are a non-negotiable pillar whose sanctity must be held sacred in the highest esteem by any entity which has so subscribed to the system. However, the experience of this in Nigeria has largely been marked with sourness. The unwholesome profile of misfortunes which befall election processes in Nigeria hold bearings to several statutory provisions which are archaic and therefore immaterial to the present realities. While the Independent National Electoral Commission (INEC) had recently introduced new ideas into the voting process, it appears that the whole election system is still being bedeviled with statutory foundational deficiencies.  The Commission, had on Tuesday, lamented to the National Assembly that the 119,973 polling units currently being used for elections in Nigeria, were those created as far back as 1996, by the defunct National Electoral Commission of Nigeria (NECON), when Chief Karibi Gagogo-Jack was Chairman (1994-1998) under late General Sani Abacha’s junta. The INEC Chairman, Professor Mahmood Yakubu, who raised the concern while appealing to the National Assembly to enable the Commission embark on the creation of additional polling units, noted that the current number may impinge upon the integrity of the 2023 elections. Professor Yakubu also told the Senator Kabiru Gaya (APC, Kano South)-led Joint Senate and House of Representatives Committee on INEC that more polling units would provide for a good voting environment and effective implementation of the regulations and guidelines of the Commission on election days. The INEC Chairman who disclosed that the Commission had received 10,092 requests for additional polling units from across the Country and that the number was still growing, was quoted: “The problem is nationwide. There are, at present, 10,092 requests for polling units from all over the Country and it is rising. In other jurisdictions, expanding voter access to polling units is purely administrative. Nigeria should aim for that. Conversion of voting points into polling units is the least controversial, timely and inexpensive solution.”

It’s high time stronger moves be galvanised from various angles to give life to the subject of the necessitating reality to modify the constitution of the Federation, to give new life to the working institutions of governance. It is instructive for policy makers and all public office holders to note that efforts towards addressing the myriad of storms troubling the Country may continue to attract disappointment and frustration, in as much as foundational deficiencies in the constitutional architecture are left unaddressed. Increasing efforts towards tackling socio-economic and political problems bewildering the Country without recourse to these foundational deficiencies may amount to making efforts to store water in a large basket. The importance of addressing Nigeria’s problems by resorting to foundational subjects is sine qua non. All stakeholders should, in the interest of the Federation, come on the same page to address the institutional deficiencies informing the failure of the workings of governance by way of statutory recourse to constitutional defects. Population explosion, outburst of socio-economic, cultural, political, ethnic and regional complexities are strongholds which have grown diverse strings of realities demanding institutional restructuring to respond constructively to them. More specific, it is essential for the National Assembly and all concerned stakeholders to work towards rejigging the electoral system to address archaic parameters with substitutes that reasonably, appropriately and appreciably bear relevance to suit present demands towards the 2023 General elections and beyond.

It is paramount for the National Assembly as the first institution of interest on the subject of law making in the Federation, to awake to the necessity of redirecting the course of the legal foundations of constitutional architecture of the Federation. It is therefore instructive for the ruling government to substantially, among other moves of importance, think towards the direction of reordering the constitutional architecture of the Federation towards the directional lines that bear relevance and resemblance to proactively attending to the demands of present realities. Updating structural patterns of governance to meet new demands is one key subject of sensitivity to governments of the advanced world. The reality is embraced by every forward looking government. Stakeholders in the Nigerian government should reason along and work towards this direction, against padding the prevailing system manifesting the effects of weakness.