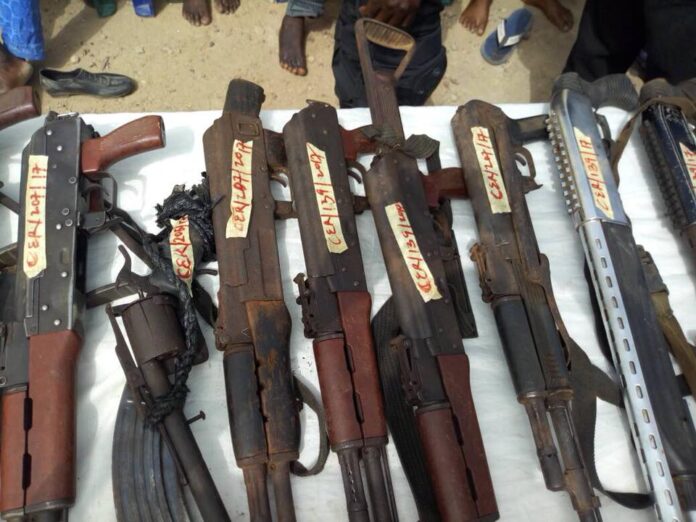 The discourse on the call for licence to be granted to citizens to possess fire arms, is one subject of resonance which is shooting off from the troubling concern of insecurity in Nigeria. The perception of thoughts that conceptually arise from the consideration of the subject, insightfully erupt several wings of disputable hypotheses which more or less fall along nebulous lines. The panic over the heightening of insecurity with troubling reports of bandit operations, kidnapping and terrorist attacks among other variant forms of insecurity menaces, have continued to heat up the polity recently. Since the Government apparently has not galvanised convincing efforts to tame the claws of insecurity beasts inflicting law abiding citizens across the Country with horrendous attacks, the call for citizens to be licenced to procure and possess fire arms has been reverberating most recently. The argument is premised on the ground that provided the Government is handicapped for the time being to address the menace of insecurity threatening the lives of citizens in the Country, then it is wise to grant them access to fire arms to resort to self-help to defend themselves in the face of attacks.

The proponents of the assertions who have berated the poor response of security architecture to emergency security situations, have argued that the best option for the citizens at the moment is the reason of self defense for them to spontaneously defend themselves from gruesome attacks. The profile of the escapades of mischievous bandits among other terror sects, has been ravaging the Federation in present times. The horrendous nature of the gruesome attacks meted against unsuspecting citizens, is a subject that has generated heated concern particularly in the sense of its perception as the heightening of injustice against humanity. The reasoning thoughts given to the sight of the fact that these beast-like elements carry out their escapades unchecked without forceful tracking to bring them to face the wrath of the law, has further strengthened the argument on the call for citizens to be fortified with arms to defend themselves against being cut unawares. It has been argued that since security operatives have been largely slow to responsively appear to the aid of citizens amidst emergencies, it is high time citizens learnt the tactics of sensitivity to self defence.

The subject, however, appears to be pitching political authorities along dividing lines. The House of Representatives on Wednesday appeared to systematically resist a motion to reverse President Buhari’s Executive Order prohibiting the issuance of licenses for fire arms by the Police in Nigeria. The sponsor of the motion, Rep. Uzoma Nkem Abonta (PDP-Abia), who struggled to present the motion on notice at the incidence of a failure of the Green Chamber’s public address system just after the Speaker had introduced it, was faced with stiff opposition. The House Leader, Rep. Alhassan Doguwa (APC-Kano) who interjected, had described the motion as “dead on arrival”, because according to him, it was an unpopular subject. The motion was entitled:  “Need to Reverse the Executive Order and Police Directive banning Possession and Issuance of New Licenses for Firearms in the Country.”

It is essential that the National Assembly as the apex lawmaking body of the Federation, put the general interest of the people they represent first in the course of discharging their constitutional duties. The need to embrace a referendum to give encapsulating resemblance to the subject is important to weigh the perception of the populace on the subject matter. It is therefore essential that the National Assembly work in the light of the most reasonable insights of democratic tenets in blending consultations with the most rational perceptions of thoughts in line with the peculiar setting of the socio-psychological formation of the Nigerian society to determine the direction of legislation on the subject. It is, therefore, imperative for the lawmakers to give consideration to  blending the interest of the Country while putting into perspective, the people’s view, the peculiarities of the social-cultural formation of the society and the prevailing demands of the state of the nation.

More importantly, it behooves the Government to forcefully brace up its grip on the manifestations of winds of insecurity brewing in the Country. The call for possession of firearms by citizens would have had no course to surface, if the Government’s grip to attend responsively to security threats had been strong enough to arrest troubling concerns. The recent reverberation of the call for firearms possession is largely a function of the perception of the apparent loss of confidence in the Government’s firmness in addressing the situation within the shortest possible time. It is, therefore, paramount for the Government to go beyond limit to enclave the beastly claws of insecurity which have been ravaging the entire Federation.