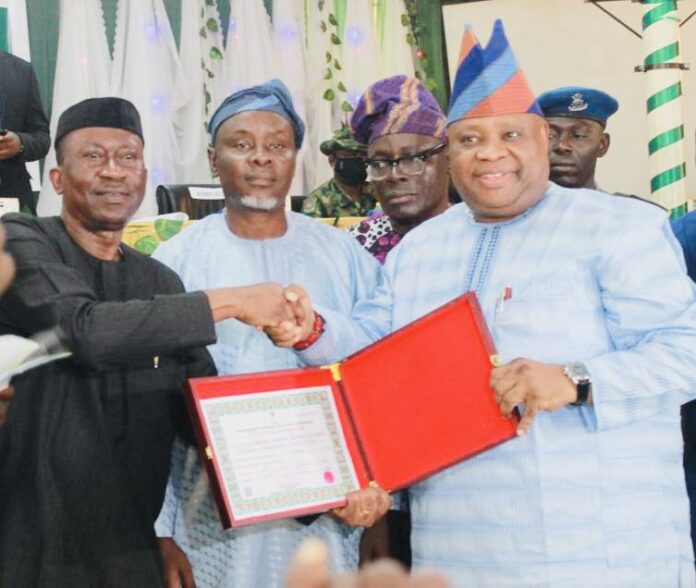 The Governor-elect of Osun State, Senator Ademola Adeleke on Wednesday assured the people of the State of a brighter future and a path of progress and prosperity in the State.

Adeleke spoke shortly after receiving his Certificate of Return along with his Deputy at the Independent National Electoral Commission (INEC) head office in Osogbo, the Osun State Capital.

The Governor-elect  who said his victory will not have been made possible if not because of the courage and determination of the people yearning for good governance said he was overwhelmed by the love, support, trust and confidence reposed in him by the people of the state.

His words,“I give thanks to God Almighty for this victory. This victory could not have been possible but because of the good people of Osun State.

“This victory would not have been possible but for the goodwill of the patriotic men, young and old who worked hard to make sure we reclaim our stolen mandate.

“I am overwhelmed by your love and support and I do not take this trust you have bestowed on me for granted.

“Our state has now turned to a new page and we can now look forward to a bright future and a path for progress and prosperity for our people. Furthermore, I would like to specially recognise and appreciate my PDP family for their support.

“I dedicate my victory to my late brother, the first Executive Governor of the state, Isiaka Adeleke and every indigenes of Osun State and to all my supporters, friends and families,” he stated.

Issuing the Certificate of Return to the Governor-elect and his Deputy, Kola Adewusi, the National Commissioner  in charge of Osun, Ogun and Oyo States,  Professor Kule Ajayi commended the people of Osun state for peaceful conduct during the gubernatorial election.

He said Osun Election happens to be the last election before 2023 general election adding that from the successes recorded in Ekiti and Osun States assuring Nigerians  that INEC has set a standard on election management.

According to him,“In consonance with the provision of Section 72 (Sub section 1) which mandates INEC to issue a sealed Certificate of Return to the Governor-elect and Deputy Governor-elect within 14 days after declaration of result by the Returning Officer.

“Having conducted a free, fair, credible and inclusive election on the 16th of July, 2022. On this note, I would like to sincerely thank every participant here present for sparing time to attend this important occasion of issuing of Certificate of Return to the Governor-elect and Deputy Governor-elect of Osun State,” he said.