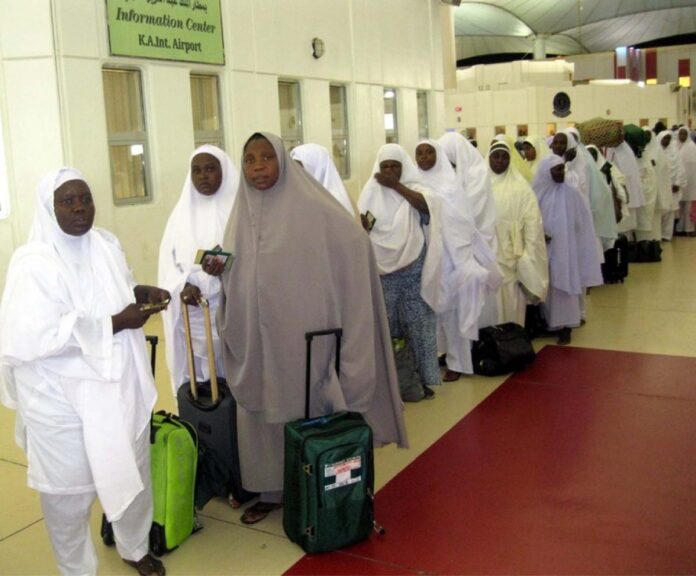 The inaugural flight of Nigerian pilgrims for 2022 Hajj exercise has begun in Maiduguri with 546 pilgrims.

The President Muhammadu Buhari, inaugurated the exercise on Thursday at the Maiduguri International Airport.

Represented by Gov. Babagana Zulum, the president said the decision to chose Maiduguri for the inaugural flight was in appreciation of the return of peace in the state.

“Hajj is one of the five pillars of Islam,” he said, and urged the pilgrims to be good ambassadors of the country and adhere to COVID-19 protocols.

The president commended the Borno Government for its complementary support to the National Hajj Commission of Nigeria (NAHCON), adding that the Federal Government had provided necessary logistics to facilitate smooth conduct of the Hajj exercise.

In his remarks, the Chairman of NAHCON, Alhaji Zikirullah Kunle-Hassan thanked the Federal Government for its support to the commission in spite of short notice to prepare and organise the Hajj exercise.

He said that 43,000 Nigerian pilgrims would perform the 2022 Hajj exercise in the Holy Land, and admonished them to be of exemplary character.

Kunke-Hassan also advised the pilgrims to use the opportunity to pray for themselves and for the country ahead of the 2023 general elections.

Also, Sheikh Ahmed Arabi, Chairman, Borno State Pilgrims Welfare Board, expressed joy over the selection of Maiduguri for the inaugural flight, adding that the State Government had granted all request by the Board to ensure smooth conduct of the Hajj exercise.

He said that over 1,300 pilgrims from the state would perform the Hajj exercise.

The Shehu of Borno, Alhaji Abubakar Umar-Garbai urged the pilgrims to be law abiding and observed COVID-19 protocols.

Recall that pilgrimage to Saudi Arabia was suspended in the last two years due to COVID-19 pandemic.