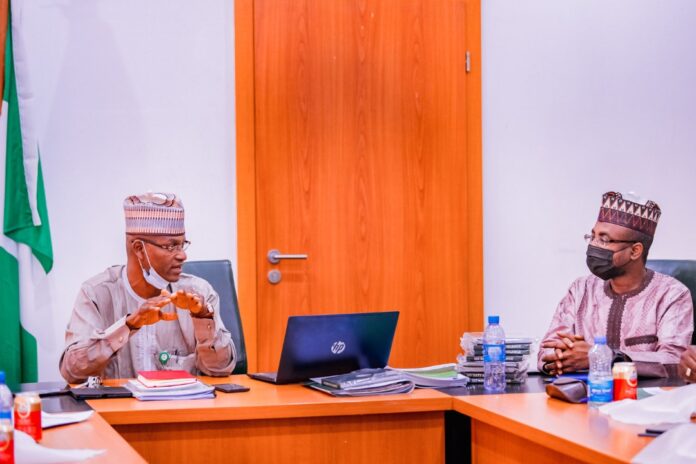 He said, “you need to make sure that the necessary capacity is developed within the ecosystem because you have a lot to do and if you do not develop your capacity; in this particular sector that is dynamic, you will lose touch with current realities.

The Permanent Secretary commended NITDA for what he termed laudable achievements and enjoined the management of the Agency to ensure that it works harmoniously with other parastatals and IT stakeholders because the objective of achieving a digital Nigerians is the same.

“We have to work together; we have one objective, to make the lives of Nigerian better. We are a communication and Digital Economy family”.

While applauding the Agency for being up and doing, Engr. Daudu assured NITDA of his supports that would make the Agency carry out its mandate effectively especially in the area of clearing IT projects of other ministries, Department and Agencies.

Earlier in his presentation, the NITDA boss informed the Permanent Secretary of various NITDA’s initiatives and how they have been impacting positively on the Digital Economy Policy of the government.

The DG stated that the Agency’s efforts at localizing the government data has resulted into the repatriation of 98% of government that hitherto hosted off shore of the country back to Nigeria.

On Indigenous Content Promotion, Abdullahi said “the Agency has issued a total number 297 Compliance notice. This is to enforce the local content policy especially on ICT.

“We have a surveillance team that looks at all ICT content”.

Mallam Abdullahi further stated that the sales of hardware under the indigenous content development has witnessed unprecedented record of over 1.2million devices sold between 2015 to 2019. Adding that the investments in indigenous software development mandated by NITDA by Federal government institutions stand at over N1.3 billion.

The DG disclosed that most of the Agency’s interactions are targeted at developing the economy of the country, adding that the country recently focused on building the capacity of Nigerians to acquire skill necessary to drive a digital economy.

“In 2020, we went around all the six geopolitical zones to train people. We do a lot of in-person and virtual training. We have trained over 35,000 on different courses on ICT virtually and developed the capacity of 1500 Nigerians at our e-Government Training Centre,” he said.

While commenting on Nigeria Data Protection Regulations, the DG said, NITDA has created N2.2billion industry, and 2686 jobs were created through the implementation of the regulation, remitted N12.6million to the federal government purse from the filling of NDPR audit report among others.

Abdullahi added that NITDA roadmaps of 2016-2020 are aligned with the National Economy Policy and Strategy and the yet to be launched 20121-2024 would consulate the pillars of NDEPS.

He said the National IT Policy the Agency was created to implement has become obsolete and the new policy of Digital Economy has compelled the Agency to rebrand and reposition itself for better performance. “All these things are not the end but means to the end because the end is how the Agency is impacting in people lives for digital Economy development”, he said.