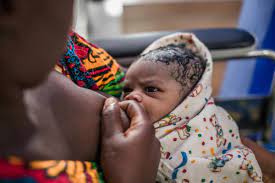 The Enugu State Government has commenced an aggressive two weeks campaign on the natural and vast benefits of exclusive breastfeeding to babies, the nursing mothers and households.

The Executive Secretary of Enugu State Primary Health Care Development Agency (ENS-PHCDA), Dr George Ugwu, told journalists in Enugu on Thursday that the campaign was being targeted on the family as the basic unit of the society.

Breastfeeding is the balanced nutritional and health-immune milk food from the mother given to the child after few minutes of being delivered and continued exclusively without water for the first six months of life.

Exclusive breastfeeding is the right of every child for the first six months of life; while it will continue with mixed light adult foods for an onward of two years of any child’s life.

Ugwu said that there would be health education and talk in various health facilities on the benefits of exclusive breastfeeding as well as sustained media programmes in local languages on the campaign.

He said that the agency would be making numerous advocacy visits to religious and traditional leaders in the 17 Local Government Areas in the state for them to be actively involved in the campaign.

He said, “Within the two weeks, between Aug. 1 and Aug. 15, we are going to use town announcers (or town criers) in various communities to spread the good news of immense benefits of exclusive breastfeeding.”

He said that the agency would embark on road shows within the metropolises of the state as part of the campaign.

The Executive Secretary said that once a baby is fed well through exclusive breastfeeding; his or her development would be rapid in terms of physical, mental and other perimeters.

“For now, from all available research conducted, exclusive breastfeeding is the most natural and best for the baby in terms of his or her development.

“The baby’s bonding with the mother and by extension the entire starts early and grows as the child mature further.

“It also helps to immune the child and preventing dangerous diseases in adulthood for the child.

“During the period of the exclusive breastfeeding, the mother has ample opportunity to learn more about her child mannerism,” he said.

The Executive Secretary said that for the family, exclusive breastfeeding increases bonding, check monetary wastage on canned or processed foods and help the entire family eats more of healthy and nutritious local foods.

“We are grateful to the health-loving Governor of the state, His Excellency Gov. Ifeanyi Ugwuanyi, for his numerous supports to the agency as well as this aggressive exclusive breastfeeding campaign.

“We also appreciate UNICEF, WHO and other international and local health partners for supporting the agency and by extension the state in its health delivery drive,” he added.