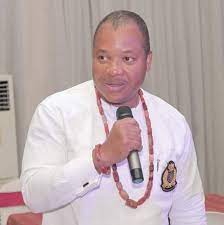 Prof. Bassey disclosed this to journalists in Uyo, the State capital on Thursday, during a press briefing shortly after taking them on a facility tour round the hospital premises.

The CMD, who appreciated President Buhari for finding him worthy for reappointment, enumerated his achievements in the last four years to include, improvement on clinical services, infrastructural development, face-lift of the premises and refurbishment of all departments.

According to him, “almost all the buildings we met on ground are at various stages of completion and some already completed. The GOPD completed and furnished. We have completed the radio diagnostics (CT Scan) building. The laboratory block which we met at the earthing level, has been completed. The molecular laboratory building completed.”

However, the CMD lamented that despite all the achievements so far, power supply was the greatest challenge in the hospital, urging relevant authorities, the State government, the NDDC and other corporate bodies to come to their assistance to ensure a seamless service delivery.

“Power is a major challenge we face, I have tried to talk about power. Unfortunately, public power has been very poor and we have been running the hospital totally on generators. This is very expensive. We use about 1,500 litres of diesel in a month, and diesel now cost about N850, N900 per litre. Then, multiply 1500 litres of diesel by 850 or N900 every month, that gives you an idea of how many millions we expend every month.

“Over 40 percent of revenue of this hospital is expended on power alone and that’s a huge cause of challenges we have here in terms of services. This is a cry for help, we need help, we are not asking for money, we are only asking for whatever intervention agencies that are there such as the NDDC, the Akwa Ibom State government can do, let them go ahead, we are serving Akwa Ibom people, 95% of our patients are mainly Akwa Ibom people,” he said.

The CMD also decried the high level of vandalism and theft in the facility despite the security personnel in the premises and urged the security to up their ante on their duty.