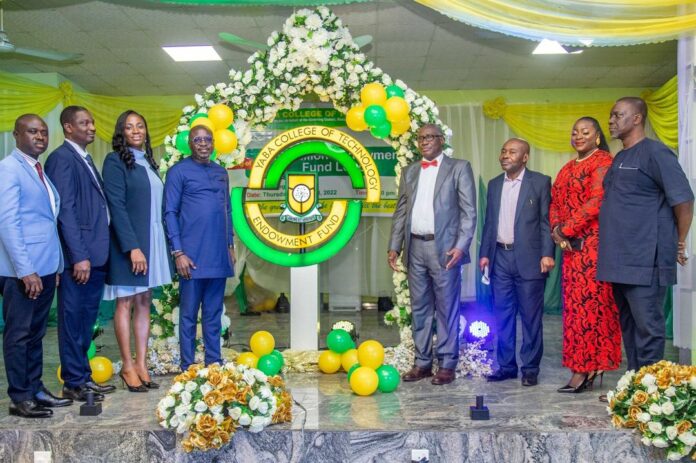 The event which was graced by cooperate bodies, authorities, alumni, lectures, stakeholders, rectors, Governors as well the former president of Nigerian, to encourage and ammerse   massive financial support to the N50billion Endowment initiative for Yaba College of Technology Lagos, as  the country’s premier tertiary institution.

However, attendees cleaved to the opportunities of fund raising with SIFAX a one-stop logistics at airports and seaports toping  the list  donor at the history breaking event with a N100 million commitment for construction of a hall on the campus.

Chief Executive of Momas, Senator Kola Balogun who was represented at the event,  guaranteed the 75year old institution of an endless financial support to the endowment while consult associates announced N10million donation

Rector of the college, Engr. Obafemi Omokungbe had earlier spoke  that the endowment was  to compliment the Federal Government in funding the institution saying:

“The College is replete with decayed and inadequate infrastructure, growth beyond the existing facilities particularly space constraint for expansion and provision of staff offices, classrooms, workshops and laboratories as well as students and other academic activities.”

Engr. Omokungbe further groaned on the development of the college’s second campus at Epe to solve problem of space in the main campus which was withheld due to inadequacy and sometimes lack of funds.

Some of the important dignitaries at the event includes, Oba Olufolarin Ogunsanwo, who made known his donation of a million Naira, as well an alumnus of the institution, Seun Jaiyesimi donated N500,000 while a sum of N100,00 was announced by Mazi Victor Cletus.

Nigeria’s former President, Chief Olusegun Obasanjo represented by Pastor Dotun Ojelabi as Chairman of the launching and Minister of Education, Mallam Adamu Adamu  represented by Deputy Vice Chancellor of the University of Lagos, Prof.Bola Oboh were also awards in respect of their committment to the endowment fund.

Pa George Majekodunmi, a 92 year-old former Rector of the Institution between 1972-1975 who was full of  pride for the Prince Lateef Fagbemi (SAN) led Governing Council of the College, pledged a donation of N200,000 while Dr Henry Ikwe pledged N6million to be spread over three years, Mr Ade Olusanya donated first tranche of N2.5m.

Vice President, Prof.Yemi Osinbajo in his adressing message via video slid, assured his support for the endowment, applauding the initiative of the College for taking the lead in the country, just like other globally recognised institutions like, University of Oxford, University of Harvard, Yale University.

Chairman of the Governing Council, Prince Fagbemi stated that the importance of the endowment was to position YabaTech as one of the top leading and reputable institutions within and outside Nigeria that consistently deliver on their mandate of providing sound and quality technological education.

He was elated that Yaba Tech despite the  challenges of funding, still ranks as number one among other polytechnics in Nigeria for third consecutive  time according to the webometric ranking in January,2022.

“We are hopeful that with the launch of the Endowment Fund, Yaba College of Technology will be able to access more resources to make our dream for the college, come true,” he added.

Fagbemi expressed confidence in the leadership of the Endowment Fund’s Board of Trustees, Dr. J.k Naiyeju, a former Accountant General of Federation, in providing a solid foundation for the growth of the endowment fund.