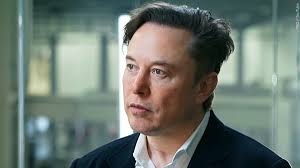 Billionaire business mogul, Elon Musk has said that he was only joking when he tweeted his intention to buy Premier League giants, Manchester United.

Musk, who, while in the midst of a political ideology discussion on Twitter, announced his intention to buy the struggling club, said he was not ready to acquire any sports team now.

He had tweeted, “Also, I’m buying Manchester United ur welcome”.

Musk is worth around $260 billion, meaning that he could easily afford buying the Old Trafford outfit. His tweet caused controversies on Twitter leading to his clarification.

“No, this is a long-running joke on Twitter. I’m not buying any sports teams,” he said.

He further explained that if he was to buy any club at all it would be the Manchester outfit because, according to him, it was his childhood favourite.

“Although, if it were any team, it would be Man U. They were my fav team as a kid,” the billionaire added.

Meanwhile, fans of the Red Devils are no longer comfortable with the current club’s owners, the Glazer family and have been protesting, asking them to go.

Manchester United are languishing at the bottom of the Premier League table after two embarrassing defeats from their two opening games.