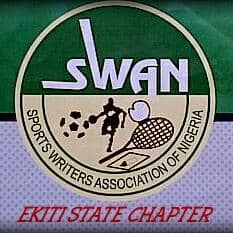 Members of the Ekiti chapter of Sports Writers Association of Nigeria (SWAN) on Wednesday elected new members of its executive committee to pilot its affairs for the next three years.

The election was conducted at the Oluyemi Kayode Stadium in Ado-Ekiti by the Association’s electoral body, SWANECO, led by its Chairman, Yakoob Popoola in line with their Statutes.

Members elected into the new executive committee are Q’ozeem Oladapo as Chairman, Bisi Ogunleye as Secretary, Kehinde Durodola as Treasurer, Abiola Alo as Auditor and Olawale Omoyeni as Welfare Officer.

Immediately after the election, some of the guests at the occasion delivered goodwill messages, calling for cooperation and selfless services.

Also, in his comment, the General Manager, Ekiti Sports Council, Ayodeji Samo, promised that government would support the association for development.

“The importance of SWAN to sports development cannot be over-emphasised. We are going to ensure we cooperate and assist you in any area within our power,” he said.

Reports state that the now immediate-past Chairman of Ekiti SWAN, Ayodeji Ogunsakin, also called on the new executive committee to consolidate on his administration’s achievements.

Speaking later, the new Chairman, Q’ozeem Oladapo, promised to build on the legacies of his predecessors to take the chapter to an enviable height.