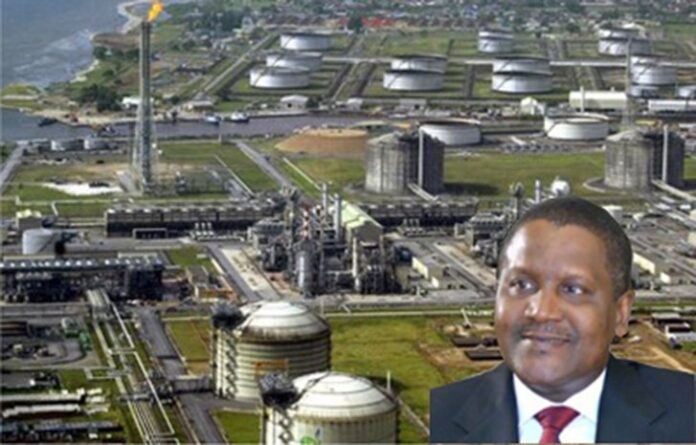 Dangote Oil Refinery has thrown its weight behind the efforts by Nigerian Content Development and Monitoring Board (NCDMB) to promote the critical issue of Research and Development (R&D) in the oil and gas sector of the country.

To underscore its’ readiness to join hands with the Board, Dangote Petroleum Refinery said it decided to sponsor the 2nd Edition of Edition of the NCDMB Research & Development Fair and Conference 2021, which took place in Yenagoa, Bayelsa State recently and would be willing to partner to ensure the Board succeeds.

Already, Dangote Oil Refinery management disclosed that it had selected six graduates across the six geopolitical zones in conjunction with NCDMB to take the MSc and/or PhD programmes at the Ahmadu Bello University, Zaria for Research & Development in Zeolites ZM5in.

With the theme: ‘Creating Sustainable Collaboration in Research and Development for the Energy Sector’, Dangote Refinery said the conference created a convergence of researchers, industry players, investors, finance enterprises and manufacturing companies to identify patentable or commercially viable products resulting from R&D activities.

The R&D fair also afforded Dangote Oil Refinery the opportunity to showcase its 650,000 barrels-per-day single largest train refinery project and what the company has done in terms of Research and Development during the construction of the refinery.

Speaking during his visit to Dangote Oil Refinery exhibition booth at the fair and conference, Executive Secretary, Nigerian Content Development and Monitoring Board, Engr. Simbi Wabote, commended the company for showing support to the board by participating in the fair.

He expressed the need for companies in the Nigeria oil and gas sector to start nurturing the growth of the country’s home-grown technology rather just being wholesome consumers of other people’s innovations.

In his opening remarks, he stated, “Analysis of global practices of Research and Development revealed that the combined R&D spend of just five countries makes up 63.5% of the entire global R&D spend. These five countries, namely USA, China, Japan, Germany, and India were also observed to have accounted for over 50% of the global Gross Domestic Products (GDP).

“Africa, on the other hand, accounted for less than one per cent (1%) of the global R&D spend while its GDP is only 3% of the global GDP. You will agree with me that there is a nexus between the spend on Research and Development, economic prosperity,” the Executive Secretary added.

Wabote said, from time immemorial to the current age of global connectivity, R&D always played a crucial role in opening up new chapters of modern life.

He listed some of the accomplishments of the board to include the establishment of the Nigerian Content Research and Development Council to advise the Board on matters relating to research and development in the oil and gas industry and the Development of R&D 10 Year Strategic Roadmap.

The minister, represented by the Permanent Secretary, Nasir Sani-Gwarzo, also called on industry stakeholders and youths across the country to take advantage of the NCDMB R&D centre to bolster adaptation of existing solutions and also come up with new ones to address major challenges in the industry.

The Bayelsa State Governor, Douye Diri, represented by his deputy, Lawrence Ewhrudjakpo, said the theme for the fair captures stakeholders’ collective commitment to aggressively drive innovation and position the oil  industry on the path of an integrated energy sector, where field development and production solutions are sourced through local capabilities.

Beyond financial intervention, he urged the oil and gas industry players to challenge the local academia with its research problems, to ensure the development of homegrown technology and the retention of oil and gas spend in the economy.