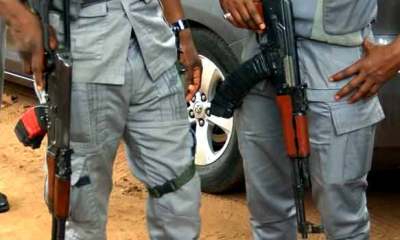 Acting Controller of the unit, Deputy Comptroller, Hussein Kehinde Ejibunu who disclosed this in his maiden press briefing said the unit will intensify its anti-smuggling activities and block areas of revenue leakages in year 2022 .

On arrests and prosecutions made last year, he said a total of 116 suspects were arrested, 18 were arraigned in court and 69 of them were released on administrative bail.

DC Ejibunu who gave a breakdown of seizures made, listed 751 pieces of cartridges, 82,171 bags equivalent of 135 trailer loads of foreign parboiled rice, 12,781 kegs at 25 litres each of Premium motor spirit, 12,394 cartons of frozen poultry products and 562 units of used vehicles.

The Acting Controller reiterated the resolve by the unit to strengthen the anti smuggling activities by fully deploying all the support and logistics provisions made available by the Comptroller General of Customs.

He said the 16 operational vehicles and 5 gun trucks now available to the unit will boost its anti-smuggling activities.

While assuring compliant traders of protection and trade facilitation, DC Ejibunu stressed that deviant behaviours of smugglers in some border communities will be lawfully tackled this year with higher intensity.

The Acting Controller sought support and cooperation of traditional rulers and state governments in the fight against smuggling. He decried a situation where some suspected smugglers are employees and appointees of state governments.

DC Ejibunu said, “There is no gainsaying that 2021 was indeed an eventful year for the Unit. Most of you will attest to the above assertion having followed closely our activities in the preceding year. I remain grateful for the steadfastness you have maintained in monitoring and covering the activities of the Unit which makes you  dependable allies.

“As earlier mentioned, the preceding year was eventful indeed going by the quantity and quality of seizures recorded by the Unit, the total revenue generated, the number of notorious smugglers arrested and the number of Commendation Letters received from Headquarters, the unprecedented provision of 16 operational vehicles as well as 5 Gun Trucks by Headquarters to the Unit to boost anti-smuggling activities within the Zone. The epileptic power supply hitherto suffered by the Unit in the office environment was equally addressed by the Comptroller-General of Customs – Col. Hameed Ibrahim Ali (Rtd) and his Management with the purchase and installation of 250KVA generating set. On a sad note, we lost 4 gallant officers during operations in the preceding year.

“The Unit generated revenue to the tune of Six hundred and seventeen million, nine hundred and nineteen thousand and ninety-five naira, twenty-five kobo only (N 617,919,095.25k). The year under review had a total suspect of 116 while 18 were arraigned, 69 were released on Administrative Bail, 1 handed over to NDLEA and 23 in custody presently.

“The tail end of 2021 witnessed the re-jigging of the Unit with operational vehicles, gun trucks and Commendation Letters by the Comptroller-General of Customs and his Management to galvanise officers and men to improve on their performance. Obviously, the re-jigging was the magic wand that shot up the seizure profile of the Unit between September and December, 2021.

“In this New Year, the Unit has discreetly mapped out strategies to vigorously pursue revenue recoveries and ensure we meet or even surpass any target given to us. All revenue leakages must be blocked as the Customs Intelligent Unit will spread their tentacles to furnish the Unit with credible information regarding concealments, transfer of value, wrong classification and low value.

“Regarding anti-smuggling activities, our focus will be the border areas as we are going to dissipate a lot of energies to intensify patrols and ensure unCustoms goods do not find their way into the country. We are not unaware of the fact that election year is just around the corner. It is a period during which illicit importation takes place and certainly, that will not happen.

“Let me at this point warn economic saboteurs and dare-devil smugglers in the Zone to stay clear or be served their waterloos, if they don’t embrace legitimate economic activities. In terms of trade facilitation, the Unit is overtly ready to protect genuine traders. Gentlemen of the Press, I really appreciate your contribution in achieving the mandate of the Unit and I implore you all not to be tired. It is my belief that greater achievements will be recorded this year.”

28 ships laden with petroleum products, others expected at Lagos ports