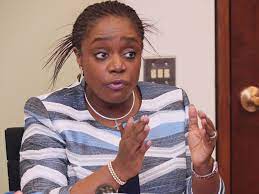 The Incorporated Trustees of Global Integrity Crusade Network, a civil society organisation, has petitioned the Federal High Court for an order compelling the DSS and police to arrest former Finance Minister Kemi Adeosun.

The plaintiff, through its counsel Esther Iorhuna, prayed for an injunction restraining Mrs. Adeosun from travelling out of the country to take refuge in another country.

The plaintiff also asked the court to order the DSS and IGP to arrest and prosecute Kemi Adeosun for falsifying a National Youth Service Corps (NYSC) Exemption Certificate and intentionally giving false evidence before the Ogun State House of Assembly and the DSS between 2011 and 2015 for the purpose of being screened for the positions of Commissioner of Finance and Minister of Finance.